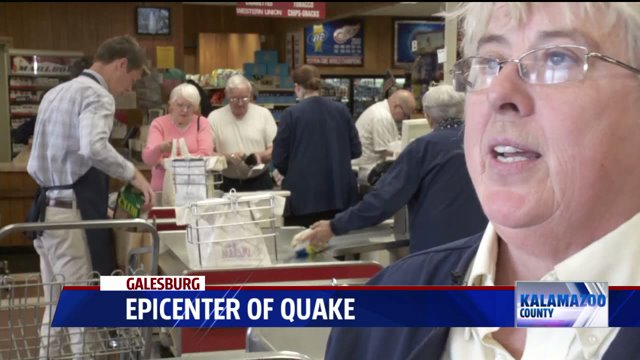 The USGS initially reported the quake as a 4.0 Magnitude, but later reclassified it as a 4.2.  Calls started flooding the FOX 17 newsroom at 12:25 pm.  Residents from all over West Michigan reported houses and businesses shaking.

It was reportedly centered five miles south of Galesburg.  The USGS is reporting the epicenter to be located near the intersection of 34th St. South and P Ave East in the small town of Scotts, Michigan.

Michigan State Police Emergency Management and Homeland Security Division tweeted Saturday afternoon just after 1:30 p.m. that no injuries or damage had yet been reported.

Calhoun County Emergency Manager Durk Dunham tells FOX 17 that there are no injuries reported in that county and he has received very few reports of property damage.

Graduates and their families at Western Michigan University had just filled Miller Auditorium for commencement services when the quake struck.  A spokesperson says the tremors rattled the crowd, but graduation went on as planned.

USGS says the largest earthquake in Michigan's history was a 4.6 magnitude that happened on August 10th, 1947.  Their website gives the following information:

"Damage was heaviest in the area southeast of Kalamazoo at Athens, Bronson, Coldwater, Colon, Matteson Lake, Sherwood, and Union City. Chimneys were damaged, windows and plaster were broken, and brick cornices were downed. Also felt in Indiana, Illinois, Ohio, Wisconsin, and Ontario, Canada. "