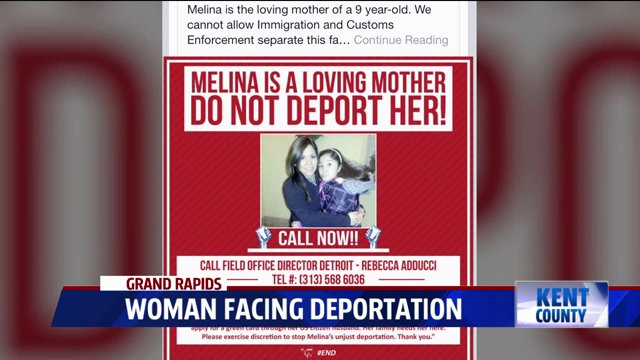 GRAND RAPIDS, Mich. --  A Grand Rapids woman is facing deportation to her home country of Argentina.

Melina Carrasco, 27, was convicted of misdemeanor retail fraud last Fall, and since then her life has been turned upside down.

Carrasco's attorney, Richard Kessler said that Carrasco came to America when she was just 12-years-old.

"Over stayed their visa. She had no choice in it. She stayed, she grows up here, speaks perfect English. She's been here 15 out of her 27 years, has a young 8-year-old child Emily. Recently married to U.S. citizen, Howard," said Kessler.

Carrasco is currently in the custody of U.S. Immigration and Customs Enforcement (ICE) in Calhoun County, where she's been for the past two weeks.

Kessler said that her family took part in the "visa waiver program," but that also gave away several rights.

"You gave up the rights to challenge anything that happened to you in immigration court later on. So, she's 12-years-old. She doesn't know what she's giving up or not. Her parents decide for, I think economic reasons, we are going to stay in the United States," said Kessler.

Carrasco's family stayed in the U.S. and Kessler said that she took part in "deferred action," aimed at helping undocumented immigrants who were brought to the U.S. as kids.

"She got through that program. She got a work permit through this program. She began to work legally, doing well at her employer, a local Grand Rapids employer and unfortunately had an issue where she got involved in a minor misdemeanor, what they call retail fraud," said Kessler.

Following Carrasco's misdemeanor retail fraud conviction, Kessler said that it turned her life upside down. After spending a week in jail for the crime, she showed up for a probation appointment and got arrested again.

"She was reported by Immigration and Customs Enforcement and she's taken to the detention center in Battle Creek at the Calhoun County jail," said Kessler.

Her 8-year-old daughter Emily and her husband Howard, both on edge not knowing what the future is going to hold for their family.

"They are processing her removal. They call her husband the middle of this week saying bring a suitcase to the Immigration and Customs Office in Detroit if you want to because she's going out in the next week or two," said Kessler.

FOX 17 reached out to U.S. Immigration and Customs Enforcement, but didn't hear back by the time this article was published.