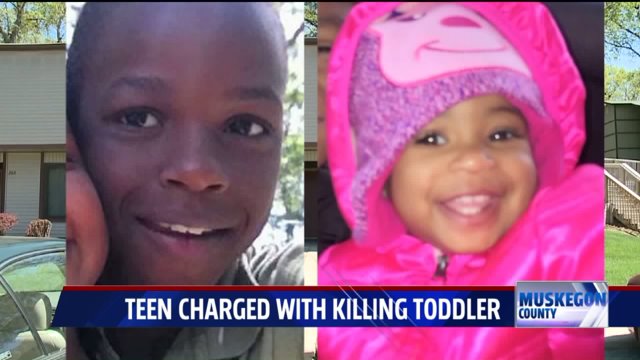 Jakari Pollard was charged as an adult in juvenile court in the Feb. 27 death of A'Laina Brown.   Muskegon County Prosecutor D.J. Hilson said the teen allegedly kicked and hit the toddler, and she later died.

The children were alone in the victim's mother's Muskegon Township home on the night of the incident, Hilson said.    Police were called to the home at about 5:20 a.m. Feb. 27 and found Brown unresponsive.

The state filed a neglect petition against the toddler's mother, 23-year-old Octavia Jones, following the death, according to child protective service documents obtained by FOX 17.

Records show Jones was not home at the time the death happened. Jones thought the children were left in the care of her roommate but the roommate apparently left the home that evening around 9 p.m. The roommate said she told Jones she was leaving and would not be watching the kids, according to documents.

An autopsy showed the toddler died from internal injuries from a lacerated liver caused by blunt force trauma, according to documents.

According to documents, Jakari admitted in March to Muskegon Township police that he hit, kicked and shook A'Laina the night of her death. The toddler's mother told police that Jakari had previously been "mean" to her children adding that she did not want him around her children.

TV cameras were not allowed inside the court proceedings Friday. During the hearing, Jakari's father argued his son never admitted to killing A'Laina. It was also revealed Jakari had recently been suspended from school for disruptive behavior and had not received any counseling or mental health checks following the death of his cousin.

Relatives of both A'Laina and Jakari said the ordeal has torn the family apart.

“What he did... it was wrong. If he did it," said Jessica McCoy. “A'Liana was my goddaughter, she was my baby.”

McCoy told FOX 17 she's disgusted that Jakari is taking the brunt of the blame because she said the incident could've been prevented with adult supervision, starting with A'Laina's mother.

“She left that house at 2 p.m. and didn’t return until 3 a.m. when she found her daughter dead, but if she had been at home with her child this would have never happened," McCoy told FOX 17.

“At the end of the day, A’Liana need justice: justice for what (Jakari) did to her and for the neglect that her mom was to her. I think that everybody that was involved need to be brought to justice.”

Pollard is scheduled to be back in court May 29 for a preliminary hearing.