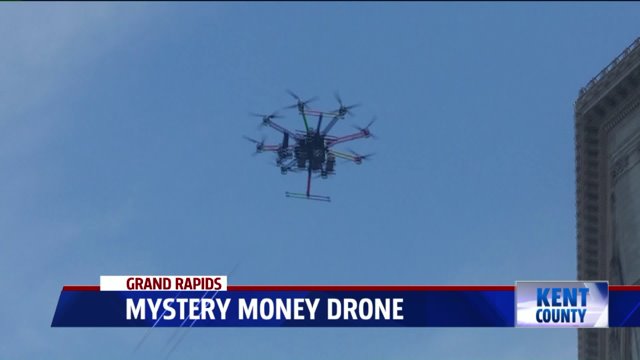 GRAND RAPIDS, Mich. -- It wasn't just mother nature making it rain near Rosa Parks Circle Tuesday night in downtown Grand Rapids.  A mystery drone dropped cash to an unsuspecting crowd at the Picnic in the Park event around noon.

Kids ran all over the park and even into the street to grab the dollar bills falling from the sky.   A nice surprise for some, but it raised some red flags, too.

The mysterious drone dropped about $100 in one dollar bills. The drop spot for the money was near Monroe Avenue, and the bills flew into the street, leaving some moms and dads chasing after their kids to keep them out of harm’s way.

One child showed FOX 17 $7 he collected during his lunch at the downtown park. Most people in Rosa Parks Circle we heard from Tuesday afternoon said they've never seen it rain like this, except maybe in music videos.

Kids scurried all over the park to grab the dollar bills, even shaking the trees to get the cash loose.

“I don`t know who decided to drop money by a road, but it’s a way to make kids run into the road,” said one parent.

After the drone made the cash drop, it headed west toward the MLive building, its operator still unknown. FOX 17 checked with the Grand Rapids Police Department to see if they knew who plotted this payday in the park.

“We did not receive any calls in reference to it and no warning letting us know that it would take place,” said Terry Dixon with GRPD.

Grand Rapids Police agree that this is a creative way to draw a crowd, literally using trickle down economics.

“In a situation like this, its obviously fun for everyone involved, especially the kids that are out there," Dixon said "There is money dropping from the sky, and how often does that happen?”

Despite the fun,Dixon said GRPD would like to be in the loop the next time. “The problem is that it could become a safety hazard for the kids or the youth that are running to get the money. They could be crossing a roadway and inadvertently be struck by a car or something like that,” Dixon said.

No one was injured.

The kids’ pockets were filled with some drone dough, but Tuesday night the question remains, who's behind the drone money?