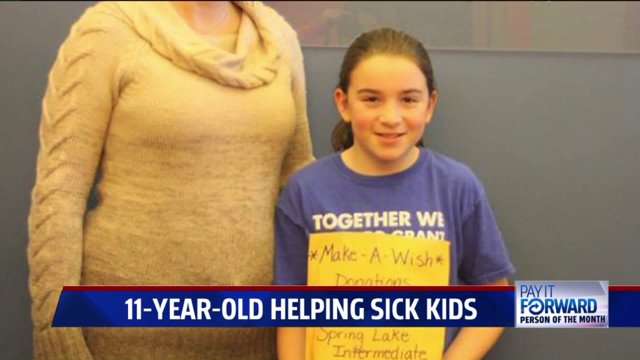 Aubrey spent more than a year raising thousands of dollars for Make-A-Wish.

SPRING LAKE, Mich., -- For the past two years, 11-year-old Aubrey Cohoon has asked for donations to Make-A-Wish, instead of presents on her birthday. Her efforts to help the charity grant wishes to children and teens with life-threatening illnesses now span year round.

"It just keeps getting bigger and bigger," explained Matt Cohoon, Aubrey's dad. "She has doubled her goal for the year and it looks like by the end of the year she will probably be close to $15,000 dollars in one year."

FOX 17 first featured Aubrey as she raised money for the group's "Walk for Wishes" last September. Since then, her fundraising efforts have exploded. The fifth grader's classmates at Spring Lake Intermediate School  have also pitched in with various fundraisers. An anonymous donor in the community has agreed to match what the school raises up to $3,000 dollars. Several businesses in the area are also donating or offering incentives to help Aubrey raise money.

The 11-year-old, who is also a talented young ice skater, was surprised by Make-A-Wish with special recognition at the group's Wish Ball in Grand Rapids earlier this month. Organizers asked her to skate in front of the crowds at Van Andel Arena with the two of her idols, Olympic champs Meryl Davis and Charlie White, looking on.

"I didn't even know what to think, it was just unbelievable," Aubrey told FOX 17 News. "It didn't seem real."

Aubrey got to take pictures with White and Davis and even hold the gold medal from the Sochi Olympics. She was also presented a first of its kind award for her fundraising efforts.

"I want their wishes to come true too," she explained. "[Make-A-Wish] lets children make their wishes come true and I feel like they're helping my wish come true by doing everything for me to skate and [perform]."

She also "Ran for Wishes" during this year's Fifth Third River Bank Run.

As the May Pay it Forward Person of the Month, Aubrey will receive a $500 dollar check, courtesy of Independent Bank.

Know someone who FOX 17 should feature as our next Pay it Forward Person of the Month?  Nominate them here.

Meet Robert Bos, our April Pay it Forward Person of the Month.