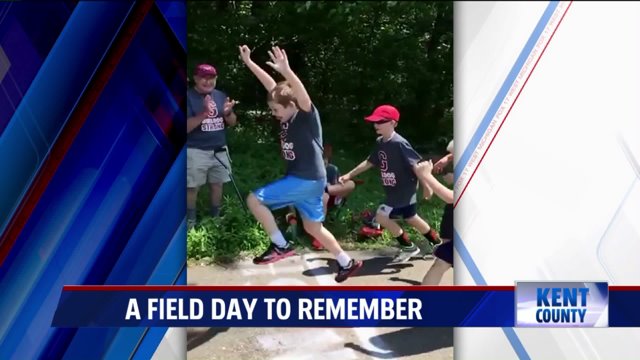 GRANDVILLE, Mich. - A fifth grade class at South Elementary School in Grandville chanted in support of Preston Lillis, a student with Asperger syndrome who ultimately won the school's marathon race. "Last year he didn't even go to school on field day. He had a migraine and stressed himself out so badly," said his mom.

Preston is in the fifth grade because of issues associated with his autism. He has had trouble with sports in the past, and his parents say he has never really wanted to take part in field day events at school.

Sensitive to Preston's disposition, his classmates and teacher came up with a plan to help him have fun at this year's field day.

"They told him their plan was to let Preston win the race," said dad Tim Lillis. "All the girls were at the end cheering his name and all the boys were full concentration at the end just trying to pull back."

A plan that was caught on camera, bringing joy to a little boy while giving his parents peace of mind.

"We're so worried about bullying and we don't know how it will be in the future, but so far we have been very lucky with these kids," said Tim. "So its been nice because our teachers have been amazing. The principle is great, and everyone there has been on board."