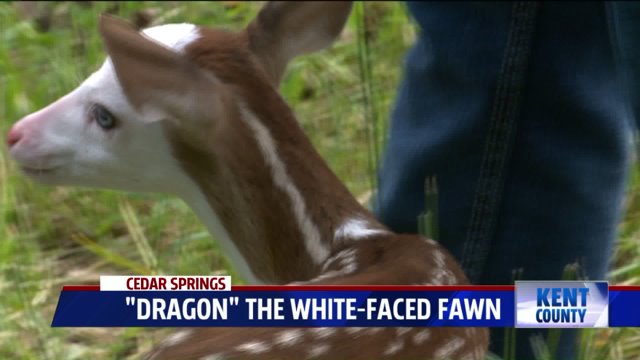 Named “Dragon,” the unusual animal was born about a week and a half ago on the farm.  But because the fawn was born with a white face, it was disowned by its mother.

The fawn is at Deer Tracks Junction on 14 Mile Road in Cedar Springs.

“In the wild, they are very very rare,” explained owner, Hillary Powell.

With his white face, crystal blue eyes and pink nose, this unique-looking fawn was a stark contrast to his normal, brown-colored sibling. And that difference could be harmful in the wild.

“Normally they have a black nose," said Powell. "It's actually a detriment in the wild, because if they don’t have shade, their nose is very sensitive to the sun and can get sunburn.”

Because of his coloring, Dragon's mother knew it would be very difficult for him to survive in the wild and hide from predators, so she abandoned him within hours after his birth.

Powell immediately became the fawn's surrogate mother. Her son named the fawn Dragon, knowing it was such contrast from his appearance.

The Powells will continue to bottle-feed him, giving him vitamins until the day he can meet visitors.