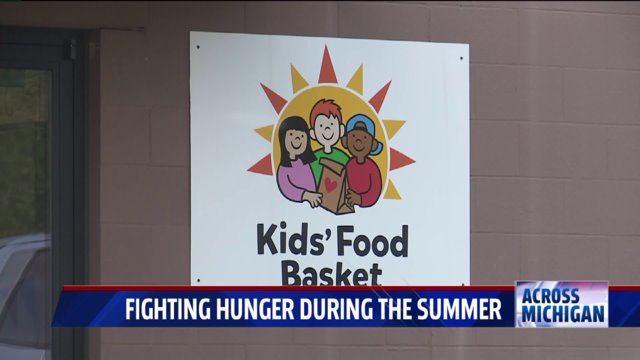 GRAND RAPIDS, Mich. -- When the school bells ring and summer vacation begins for students across West Michigan, the end of the year also signals the start of uncertainty for thousands of those children.

Clark Whitney is the executive director with the Kids' Food Basket in Grand Rapids. She said it's really a tale of two summers for kids once school ends.

"For so many kids, summer is a time of relaxation and of fun with their friends and family," she said. "But for so many children here in this community... when school is out for summer, for children, comes with it the anxiety and stress of not knowing where their basic needs, like their next meal will be met."

Clark Whitney said to put the need in perspective, the roughly 30,000 children living in the county below the poverty line could fill the Van Andel arena roughly three times over.

"There`s huge need in the summer," she said.

It's a similar story in Kalamazoo County where the number of children under the age of 18 living below the poverty line currently hovers around 12,000. In Muskegon County, it's roughly 13,000, according to the latest 'Kids Count' data from the Michigan League for Public Policy.

That's where organizations like the Kids' Food Basket come in, which is one of several organizations across West Michigan providing children with places to get a meal, no matter the time of year.

Beginning June 15, the Grand Rapids Public Schools' 'Meet Up and Eat Up' campaign will offer free breakfast and lunches to kids 18 and under at several schools across the Grand Rapids area. Those interested can dial 2-1-1 or text FOODMI to 877877 for location information. Meet Up and Eat Up will have  breakfast and lunch for children at Alger Middle School, Dickinson Elementary, Gerald R. Ford Middle, Mulick Park Elementary, Martin Luther King Leadership Academy and Umich Sheldon from 8-8:30 a.m. and 11:30-12:30 p.m., respectively. (Scroll to the bottom of this story for a complete list.)

The organization serves students in Grand Rapids, Holland and Muskegon.

On Monday, the state of Michigan was also awarded a $5.5 million federal grant to provide summer meals to more than 40,000 children across the state, including in the Grand Rapids Public Schools and Kentwood Public Schools.

“Meet up and Eat Up” offers free summer meals for children 18 years of age or younger.  All sites are open to the public, and there is no registration.

The following summer meals sites will be offering lunch and a snack, starting on June 15. Lunch will be served Monday-Friday from 12:00-12:30pm. Snack times are to be determined. All dates and times are subject to change.