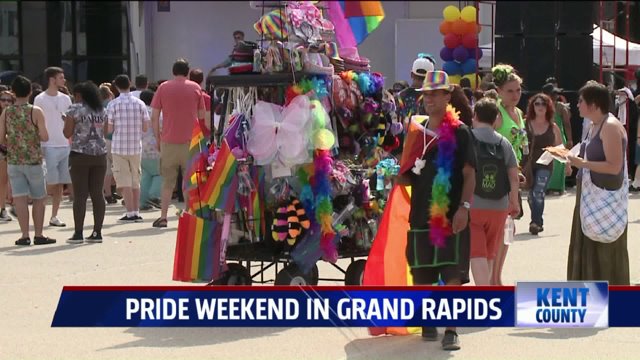 Saturday's festivities took place at Calder Plaza with more than 9,000 people celebrating equality and diversity within the LGBT community while practicing unity and acceptance.

The Pride festival has been hitting the streets of Grand Rapids for 27 years. Mike Hemmingsen, Director of Pride, said the event celebrates more than just diversity within the LGBT community.

"This is an inclusive event, it’s not just LGBT," said Hemmingsen. "We want the people in the community to be apart of it."

With more than 180 volunteers, Hemmingsen said Pride is a family-friendly event where all walks of life come together in unity. This year's Pride took place as Michigan and the rest of the country awaits for the U.S. Supreme Court to issue their ruling on gay marriage, expected to be handed down by the end of the month; a decision that will set a precedent for the entire country.

"I think we’ve finally gotten to the point where people are saying, 'You know what? They’re part of our community, they’re strong and they contribute in more ways than we can imagine. So just let them be and have a good time'," said Hemmingsen.