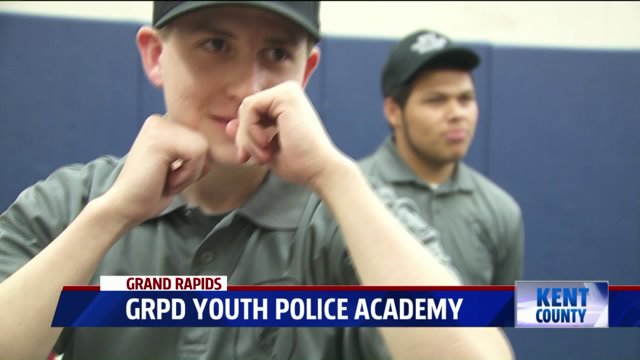 GRAND RAPIDS, Mich. – School is out, but class is in session for the Grand Rapids Police Department: their first of two junior police academies this summer kicked off Monday morning.

For one week, high school sophomores to recent graduates from schools around West Michigan take on what it really means to become a police officer.

Kenowa Hills High School Graduate Liz Caputo said she is ready to take on the challenge of working in a field that men typically dominate.

“I have to up my game because I have to compete against males who are normally physically stronger, but we definitely have a little more on the mental side,” said Caputo.

Not only will students learn the same skills that officers are trained with, sergeants leading the academy said they are teaching them the other side of law enforcement.

“We do want to change their perceptions that there are probably some negative views towards police officers, the majority of them are good, positive, caring people that want to give back to their community,” said GRPD Sgt. John Dorer.

Not all students at the junior police academy said they want to work in law enforcement, but they all show drive, like Ottawa Hills Senior Darryl Madlock. After his track team placed third in Nationals, he got home from out-of-state Monday at 3 a.m. and woke up in time to be at the training by 7 a.m.

“I never really thought of being a police officer, I just really wanted this experience,” said Madlock.

Yet others like Ryan Johnston said this is an opportunity to carry on his grandfather’s legacy, who worked at the Grand Rapids Police Department nearly 40 years.

“You take a beating, but that call where you go save somebody, go return a missing person, you solve a crime for somebody, it’s so rewarding,” said Johnston. “You can go home at night feeling good about yourself.”

Dorer said it is a competitive process to apply for a spot in this youth police academy. Whether students are interested in becoming a police officer or just getting this hands-on experience, the application process for next year starts in January with school recruitment. Then, applications are due in April.

To learn more about the GRPD junior police academy and application deadlines, see the city’s website.