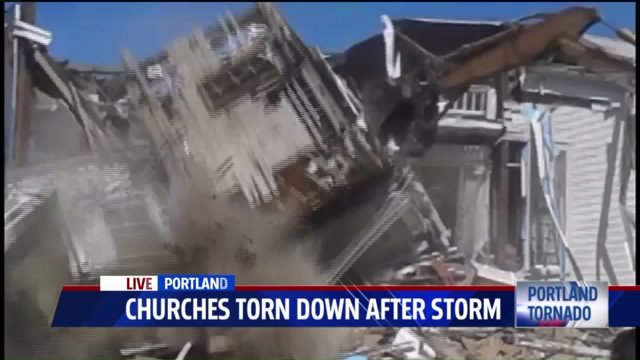 PORTLAND, Mich. -- The steeple of the historic First Congregational Church came crashing to the ground as an excavator dug into the building this morning. It's necessary demolition, but it was a somber sight for the Portland community.

Longtime pastor Marilyn Danielson said the new steeple cost $125,000 to construct and the final touches were put on just hours before the tornado hit.

"They had the lights finished two hours before the tornado hit, and we never saw it lit," Danielson said.

Three other churches in the city were also hit by the twister with winds over 100 miles per hour. First Congregational Church has been around since the 1850s. Directly across the street, First Baptist Church just celebrated its 175th anniversary and also suffered heavy damage. However, the community is counting its blessings. No one died, and as FOX 17 has heard over and over, material things can be replaced.

Things like the church bell, which the First Congregational prefers to salvage without a scratch. It was built in 1906, and Danielson said the cast iron bell landed in the third pew still attached to the steeple.

Nelson said, "It was a matter of peeling back the layers and finding the bell."

The longtime church member volunteered with the demolition crew and carefully broke through the steeple's wooden frame to free the 800 pound bell. A few hours later, the crew had success.
It recovered the bell and gently pulled it from the steeple and placed it into the back of a wooden trailer. Danielson said a prayer.

Nelson said, "Many things that are very tough are also very fragile depending on how they're handled."

FOX 17 learned the bell had just been refurbished along with the new steeple.

Danielson said the bell will continue to serve it's purpose as the church looks forward to a brighter future.

The pastor said it's not clear what God is trying to tell them, but "one of the themes of our faith is resurrection, and I believe that we will resurrect."

"It's going to be grand," Danielson added.

FOX 17 also spoke with the pastor of First Baptist Church, Gary Coleman. He said the steeple will be demolished tomorrow morning. There's also a bell in there that crews will try to salvage. Once the steeple and upper walls are removed, Coleman said a structural engineer will then go inside to see if the rest of the church building can be saved.