A first-hand look at the dangers of drinking and boating 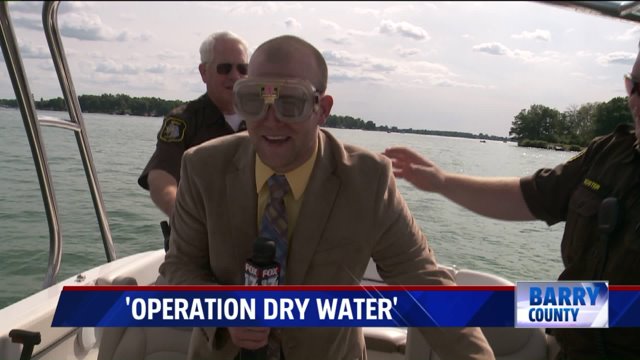 BARRY COUNTY, Mich. - Alcohol is the leading cause of death in fatal boating accidents: according to the National Association of State Boating Law Administrators, which is why police are busy educating people about the issue before the 4th of July holiday.

This weekend is the National Boating Under the Influence Awareness and Enforcement Campaign called Operation Dry Water. Aimed at educating the public before someone makes a poor decision while boating, jeopardizing their own life or the lives of other boaters.

Dept. Bill Johnson at the Barry Co. Sheriff's Dept. said people are unfamiliar when it comes to boating under the influence.
"We still have a lot of people that are unaware that they can drink on a boat," said Dept. Johnson.

And while having a beverage or two on the water isn't illegal, being too drunk to drive a boat is. In fact, the blood alcohol limit for boaters was reduced from .10 to .08 this past December. And according to deputies, the effects of alcohol is much stronger on a boat than on land.

"The wind, the sun, and the wave action accentuates all the drunkenness per say of the individual," said Dept. Johnson. "His reaction time diminishes drastically. You add in the alcohol to the distraction of other passengers in the boat, and you've got traffic from boaters in 360 degrees."

Dept. Johnson says this becomes a recipe for disaster, but said there's an easy solution to avoid a deadly situation on the water.

"Either get a designated driver or curtail your drinking if you're going to drive," said Dept. Johnson.

The state laws still apply, you have to be 21 to be able to drink. If you are caught violating the rules on the water you could be arrested or even have your boat impounded.