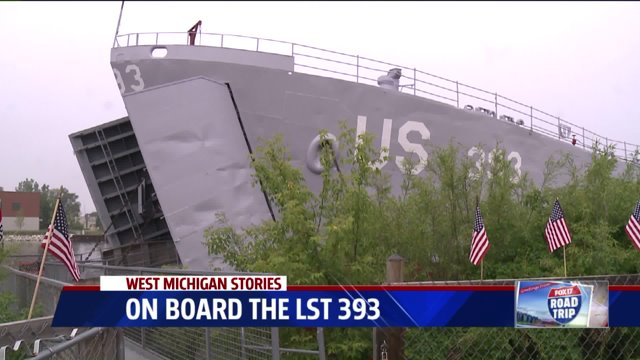 MUSKEGON, MI.-- Perhaps one of the rarest items West Michigan has from World War II and the actual D-Day invasion on the beaches of Normandy, France in 1944 is the warship LST 393 docked in Muskegon. This ship, now a floating museum, is completely open to the public for tours. Not many know it, but the huge bow doors opened up during the D-Day invasion and it was the actual ramp of this flat-bottomed ship that hit the sand along Omaha Beach.

After the military completed its use for this LST, which stands for landing ship tank, it was purchased by a West Michigan company in 1947 to run freight from Milwaukee to Muskegon (actually new cars). The ship originally carried supplies and equipment, not troops. It could roll out 28 Sherman military tanks from its open hull (through the huge bow doors that swing open) and the weather deck (or top deck as it's referred to) was also loaded with additional equipment.

During the D-Day invasion the LST's could pull up directly on the beach, lower their bow door ramp, and off-load hundreds of thousands of pounds in war supplies and equipment. Winston Churchill called the LST one of the most powerful pieces of equipment in World War II!

Muskegon's LST 393 was rusting away and was quite the eye-sore for many years, but a group got together, raised funds, and restored the ship to its original integrity. In fact, it was probably the removal from corrosive salt water to the Great Lakes fresh water that helped preserve the solid steel hull of this more than 60 year old ship. The keel was laid in 1942 and she sailed in 1943.

The LST 393 was recently repainted to D-Day gray (or battleship gray) for the recent anniversary, so it looks fresh, clean, and almost ready to go in to battle again. Once inside, there's a gift shop with real hand grenades and other fun mementos, but there's plenty more to see like veteran exhibits, officer quarters, the engine room, mess hall, kitchen, or sleeping bunks. You can also walk the top deck and get a true feeling of the size of this 338 foot long 50 foot wide (beam) warship.

One of the really rare items on board is the original flag that was flying on D-Day the day of the Omaha Beach invasion on the French shores. It's a bit tattered, but from where it came from and for what it stands for it's difficult to not get emotional in seeing it!

Thousands of people have been driving by this ship for years not knowing or realizing that it is indeed a museum that can be toured. How rare is it? Of the 1,051 LST ships that were built, this ship is one of only two in the entire United States in one piece and on display!