Home of Craigslist killer up for sale 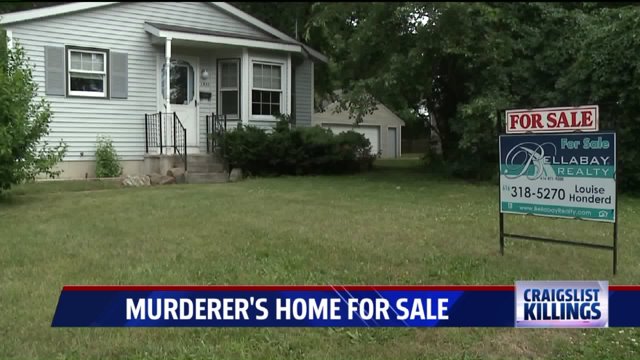 Neighbors and a real estate expert weigh in on the sale of the alleged killer`s home.

WYOMING, Mich. — The home of Cragislist killer Brady Oestrike is up for sale a year after the horrific killings in Wyoming.

According to the Grand Rapids Association of Realtors website, the 3-bedroom Taft Avenue home is currently on the market for $104,900 from Bellabay Realty.   The listing is marked as "New" on the website.

Sunday marked the one-year anniversary of the triple murder-suicide.  Investigators believe that Oestrike met Brooke Slocum, 18, who was 8 months pregnant, and her boyfriend Charles Oppenneer, on Craigslist before the killings.   The couple was planning to meet the 31-year-old for sex in a park, officials said.

"Some people don't care, some people do, so ultimately we recommend to the realtor member that they get the seller's written authorization to disclose what may have occurred on that property," said Julie Rietberg with the Grand Rapids Association of Realtors. "In most cases, especially in a homicide, less so a suicide, cases of a homicide, there are more people who are going to shy away from that sale."

Oppenneer's body was found decapitated on Wednesday, July 16, 2014, in a park off Gezon Parkway in Wyoming,  His head has not been found.

The discovery of the body eventually led authorities to question the whereabouts of Slocum.

A neighbor said maybe the sale of the home can help the entire neighborhood move forward.

"We pretty much kept to ourselves, you know waive bye and hi and that's it, but after this happened, like we got  to know a lot more of our neighbors," said neighbor Nancy Cymps.

On July 17, 2014, as police staked out Oestrike’s home while waiting for a search warrant, the suspect drove away, leading officers on a “high-risk” chase down Burton Street to U.S. 131.

Oestrike crashed his car and then killed himself on an overpass over the freeway.  Investigators found Slocum's body inside the car's trunk.

Police determined that Oestrike killed Slocum and Oppenneer on July 12, 2014.

Restraints and other items found inside Oestrike's home seemed to indicate that Slocum was held captive for several days before being killed.

Here is a statement given to FOX17 by the seller's agent, Louise Honderd with Bellabay Reality:

The sellers disclosure in the state of Michigan does not ask if the previous owner committed a crime.  And even if it did, court appointed representatives handling the administration of an estate are exempt from filling one out if they have never occupied the home.

The previous owner committed crimes that resulted in the tragic loss of life to his victims and to himself. While I do not have knowledge of those crimes actually occurring inside the home, as the victims were not found in the house,  we do not know what  actually did or did not happen there.  It was a very high profile event that shocked and saddened the entire community and our hearts go out to the families of the deceased.

Furthermore, in the real estate profession, we believe it is always best to disclose any material facts known about a property.  There is some debate as to whether or not the ACTIONS of a previous owner would be construed as a material fact regarding the home itself, such as a bad roof, wet basement or a mold issue. The house itself is an inanimate object with no ability to do right or wrong, however  if knowing about the actions of the previous owner would make a difference to a potential buyer, then our position at Bellabay Realty is that it is best to disclose, and therefore  put a note on the listing for any agents showing the home that the property has an unusual history and for the buyer or buyer agent to do their own investigation regarding the property.  The house  is a well maintained 3 bedroom home built in 1989 that is in very nice condition.