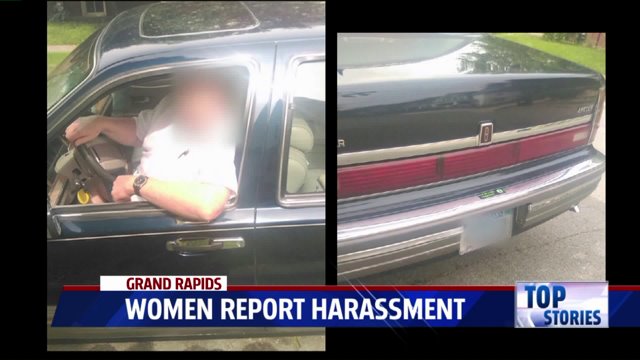 Editor's note: This story has been edited with an added response from the Grand Rapids Police Department Tuesday morning.

GRAND RAPIDS, Mich. -- What began as a post on the popular blogging site, Tumblr, has ballooned into a picture and story that has been shared more than 100,000 times online.

FOX 17 chose to blur the man's face because he has not been arrested or charged with a crime.

Devin Dinsmoor told FOX 17 she was followed by an older man with white hair and a white mustache last who was driving in an early-90s Lincoln Continental. The man began snapping unwanted pictures of Dinsmoor before harassing and yelling profanities at her when she asked him to delete the pictures, she said.

Dinsmoor said she was walking her dog in the area of Robsinson and Norwood on the east side of Grand Rapids during the day when the man approached her in his car and started snapping pictures, telling her she was 'public domain,' she claims.

Dinsmoor took photos of the man and the license plate on his car as he tried to lure her in closer, she said.

The man told Dinsmoor she had a 'nice set of t***s' before agreeing to delete the pictures and drive away, she said.

Police were notified, but Dinsmoor said she was told the man was in his right to take photos in public.

Dinsmoor's post quickly went viral, attracting the attention of several other women in the area claiming the same man did the same thing to them. She told FOX 17 at least half a dozen women in the Grand Rapids area reached out to her about similar encounters with the same man.

Emily Gray said she was stopped by the same man and verbally harassed.

Emily Gray contacted FOX 17 saying she was also verbally harassed by the man last week, who she described as looking like Wilford Brimley.

Gray told FOX 17 once she saw the photos posted online, she knew instantly it was the same man.

It was the middle of the afternoon last week when Gray said she was approached by the man near Michigan and Diamond while she was walking her 2-year-old daughter in a stroller.

“I went past him and I heard him say something to me, but I wasn’t sure so I kept walking and about 30 seconds later he slowly drove right next to me at my speed of walk," she said.

“He was asking me all kinds of disgusting, explicit things about particularly my breasts and every other part of my body."

Gray said the encounter lasted about a minute before she told him to leave, prompting him to yell profanities. Gray said the exchange ended with the man telling her she had nice breasts that he was going to chop off.

“I just wanted him to go away and the way he was doing it was just very clear he’d done it before," she said.

FOX 17 learned Monday the Grand Rapids Police Department does have a sergeant working on the case. On Tuesday, Lt. Scott Weitzell said the incident had been 'dealt with' and GRPD had received no formal complaint regarding the situation.

Weitzell said technically no crime was committed, but urged people to call 911 and report an encounter immediately to make sure police are aware it's happening.