Old Bronson Theatre is host to plays and food pantry 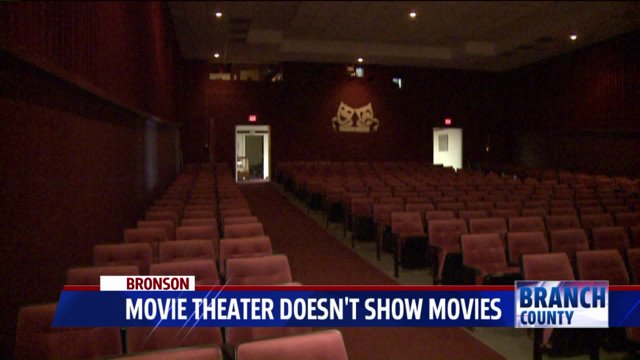 BRONSON, Mich.-- Most cities and towns across the United States have a theater. I've actually been to some beautiful, historic, small town theaters right here in West Michigan. Most have kept things exactly as they were when were built decades ago, while others have remodeled a bit and refurbished in an effort to keep a landmark open and help revitalize a downtown area. While there may be a few changes on the outside and inside at the old Bronson Theatre in Branch County, much of it is still similar to the way it was when built in 1948.

The Bronson Theatre hosted some of the last huge blockbuster movies in the late 1970s like Star Wars and Smokey and the Bandit, but it is no longer a place to go and see movies. The last movies were shown in the very early 1980s. That said, entertainment can still be found on stage in the theatre from time to time when the local high school drama and thespian club holds their plays there. The other important community connection this theatre maintains? Since 1993 it has been home to the Bronson food pantry.

Between 125 and 150 families visit the needed pantry each month, so the need is certainly there. It was started by retired school teacher Ellen Shoun and I'm told she has tirelessly put in her time, money, and effort in making it successful, while at the same time seeking donations from the community and getting five various denominational churches involved too! The concession area of the theater has been remodeled and somewhat removed in order to accommodate the pantry area.

It's amazing to visit the old projector room in this theatre where two, very old, original projectors remain. They are what is known as carbon rod projectors built in the 1920s. While non-operational now, they once used a carbon rod (similar to a welding rod) to spark the arc (so-to-speak) and create the bright light source needed to show the film on the screen. They actually had to have exhaust vents in the projection room to carry the fumes up the pipe and out of the building (similar to a chimney). Click here to see how these projectors work. My...how far we've come these days with technology! Movie theaters now typically get their flicks off a satellite feed or via a hard-drive mailed to them directly from the movie distribution house.

The Bronson Theatre also had new seats installed in/around 1993 by local prison labor. At that time during inclement weather days, the city could borrow prison labor to perform other tasks. A stage was built and the idea of hosting high school plays, social gatherings, and other events was the main idea and plan set by Bronson Community Foundation in the late 1980s/early 1990s.

This particular theater also had a cry room. It wasn't used for movie goers that got emotional during the movie, but rather a place for parents to take their children in the event they were a bit noisy. They old cry room has now been transformed in to a light booth with spotlights and light boards used for plays on stage. While it's not necessarily the immediate goal of the foundation to show movies, the fact that they saved the building, refurbished and renovated it, kept the huge movie screen, and can put it to good use more than 60 years later for community events is a testament to the folks that live in Bronson and the things they cherish.

They raised funds to pay monthly utility bills by renting their outside marquee, renting a refurbished upstairs apartment attached to the theater, and by donations. The foundation almost lost the theater a few years ago when they were hit with a $7,000 gas bill. As fate would have it, donations came through and saved the day!

I always like to leave folks with a internet link or two where more information can be found, but there's little/no additional information on the Bronson Theatre available on the web. Click here for the city of Bronson website and clerk/treasurer Karen Smith who can offer more information about their theatre.