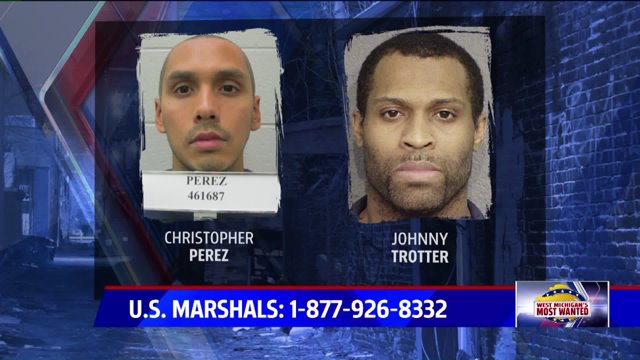 WEST MICHIGAN - The U.S. Marshal Western Michigan Fugitive Task Force is seeking tips to aid in the search for a pair of parole violators with ties to the Grand Rapids area.

Christopher Perez, 30, has avoided authorities since March 2015.  His online record with the Michigan Department of Corrections details prior convictions including the delivery and manufacturing of narcotics and home invasion.

Johnny Trotter, 41, has avoided authorities since May 2015.  His online record with the Michigan Department of Corrections details prior convictions including larceny in a building, prison escape, armed robbery, weapons violations and malicious destruction of fire or police property.

Trotter is 5'9", 176 pounds with black hair and brown eyes.  His left ear is pierced and he has a scar on his right eye.

If you have any information that could help in locating Perez or Trotter, contact the U.S. Marshals Fugitive Task Force at 1-877-926-8332.