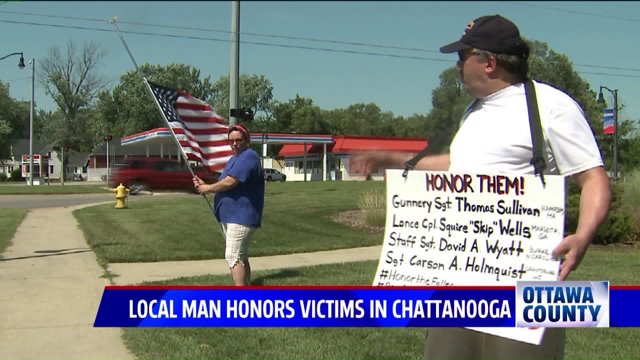 ALLENDALE, Mich., -- It was quarter to eight on Saturday morning, when Alan Vanden Bosch made his way to the corner of 68th street and Lake Michigan Drive to raise awareness of the tragedy that recently unfolded in Chattanooga, Tenn.

He planned to stay one hour for every service member killed, but those five hours turned into nine, as the community rallied behind a man and his wife, who stood on a sidewalk with an American flag and sign to honor those who lost their lives in the attack.

"I think it's time to honor them and honor their memories. These are men who had families, they had parents, loved ones, their gone and they've been taken from us," said Vanden Bosch.

Vanden Bosch's sign named all four Marines that were killed Thursday, along with a U.S Navy Petty Officer, who was wounded in the shooting and died early Saturday morning.

Although he was over 600 miles away from the tragedy, Vanden Bosch felt he had to do something.

"I think I have an obligation to them, it's buried in myself, bigger than myself," he said.

From honks, to waves, to water, the community supported the American flag and sign.

"The fact that some people have stopped to talk to me and make sure we're hydrated by bringing us water, it's been amazing," Vanden Bosch said.

Two kids even gave Vanden Bosch a pair of Superman socks to say thanks.

"We wanted to give them to him because he represents a hero," Mckayla Cook said.