Recycling fees rising slightly in 2016; See how much residents can expect to pay 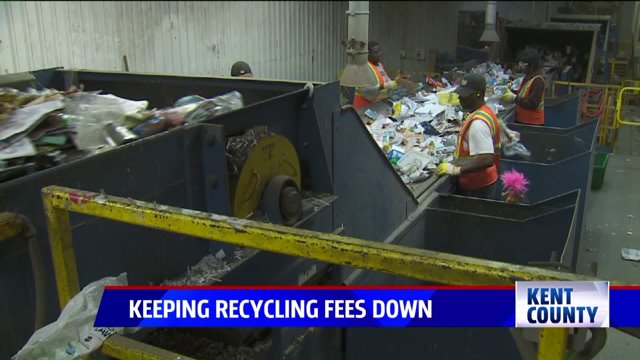 KENT COUNTY, Mich. – At the Kent County Recycling Center employees sorted 32,000 tons of plastic, glass, and paper last year. However, 4,000 tons of that was trash, and it’s this stuff that does not belong there that is showing up in bigger quantities.

Lately workers have found everything from clothing to garbage and dog waste, and that means customers will see an increase in recycling fees. However, some good news: Kent County Department of Public Works Director Dar Baas told FOX 17 News that households can help keep this fee down.

It may not be enough to break the bank for residents, but Kent County plans to charge $10 per ton of recyclables in a service fee when brought to the plant starting Jan. 1, 2016.

“[Residents] may see a slight increase; their haulers are going to have to decide how much they want to pass through,” said Baas. “The average homeowner recycles about 500 pounds per year; so if you say $10 per ton, 500 pounds that’d be a quarter of that, they might see $2.50 per year increase in their recycling fees.”

Baas explained this tipping fee is designed to help the center make up about $1 million in deficit from this year alone. The recycling center has not been profitable since 2012, and Baas said this is due in part to an increase of trash, or things they just cannot process at their single stream recycling center.

It could be people trying to save costs on trash cart fees, or maybe they just don’t know any better; either way, stuff like hangers and Styrofoam costs the center more money.

“Last year we processed about 32,000 tons, and about 4,000 ton of that was trash,” said Baas.
“That increases our cost both to dispose of it, and it makes it harder for us to process, so it takes more labor effort.”

Another issue causing recycling plants to lose money nationwide is the value of recycled material is down.

“While it’s cheaper for us to fill-up our cars, and that’s great petroleum prices when they fall off, it makes the plastics and materials that we can broker less valuable,” said Baas.

While the Department of Public Works funds the Kent County Recycling Plant, and not taxpayer dollars, Baas reminds residents they can help keep this pending service fee down.

The fee goes into effect Jan. 1, 2016, although Baas said after one year they will reassess, meaning this fee could fluctuate over the coming years.