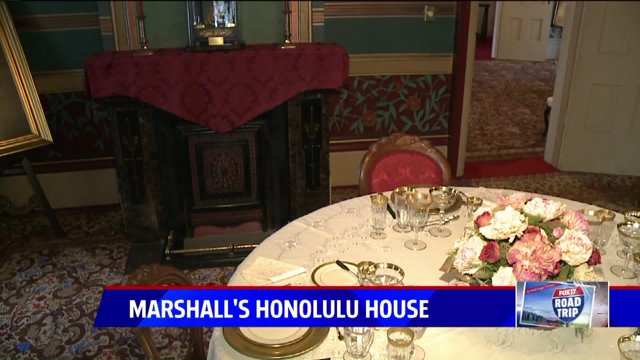 MARSHALL, Mich. -- Most of us probably wouldn't expect to see a piece of Hawaiian culture in West Michigan, but the Honolulu House in downtown Marshall is just that. The house was the brainchild of Judge Abner Pratt and built back in the 1800s after his trip to the Hawaiian Islands. The judge served as the United States council to the islands between 1857 and 1869 and returned to Marshall to build his own Polynesian paradise.

The Honolulu House welcomes people with a grand spiral staircase and is lavishly decorated throughout with tropical designs and Victorian artwork. The rooms have traditional 15 foot ceilings, and 10 foot doors and windows common to Hawaiian architecture. The entire main floor was painted by itinerant painter F.A. Grace. His artwork and painting tended to be three-dimensional and was reminiscent of the Industrial Revolution where rivets, bolts, and screws were common.

The house has all donated items and artifacts with one original couch from Pratt in the late 1800s. Visitors to the Honolulu House can expect to see paintings, lamps, furniture, a piano with pearl inlaid keys, and everything else in between. Some changes also occurred from the third owner of the home in the later 1800s as the slate fireplaces were painted to look like marble. Electricity was also added so light fixtures exist from the era that combined both electricity and natural gas.

As our tour took us in to the basement, we found an old plank (original wood floor) and a cast iron wood stove for cooking. Perhaps one of the most unique things made in Marshall in the 1800s was a folding toiletry stand designed for Pullman trains. There's also a hand-crafted wood dresser that doubles as a galvanized tin bathtub behind the dresser.

The Honolulu House is one of 11 museums in Marshall available to the public. Click here for more information. A link to the Marshall Historical Society can be found here.

The city has both walking tours and guided tours available. One other historical note...Marshall was actually in the running to be the state capitol at one time. Sidney Ketchum came from Detroit and started Marshall in 1831. Legislators gave themselves 1o years to find a capitol between 1837 and 1847. They debated the full 10 years and finally decided Lansing would be the new spot! At the time, Lansing only had eight registered voters and no main roads.