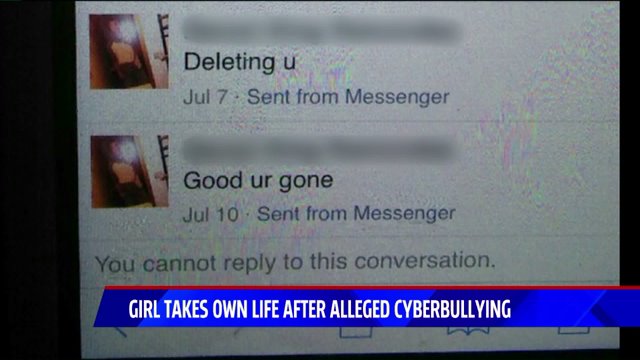 It's the message Rebecca Abbott is hoping resonates with other parents and teens after her daughter committed suicide in early July. Abbott said she believes cyber bullying lead to her daughter's death.

Zoe Johnson was 13 years old when she died July 6. She was a member of the cheer team and had just finished the seventh grade at Kenowa Hills Middle School.

“These kids, I don’t think they realize how mean they’re being to each other," Abbott said.

“I don’t know, I think it was just a cry for help, but I don’t think she realized the finality of what she was doing."

Zoe had dealt with bullying for years and suffered minor depression, according to Abbott. But toward the end of the school year the taunting became worse, her mother told FOX 17.

One post Abbott provided to FOX 17 from Facebook, dated the day before Zoe's death, was a picture reading "tag a b***h you don't like" with Zoe's name attached by others.

Abbott said people continued to post to Zoe's Facebook after her death, with one person even writing "good ur gone."

Some recent studies suggest as many as one in every four teens has been bullied at some point online, and in many of those cases it's likely happened more than once. According to the American Association of Suicidology, rates for suicide among 10 to 14 year-old teens has grown 50% in the past three decades

“Kids don’t know how to confront it. They don’t know who to turn to," said Nicole Dombrowski, Zoe's longtime competitive cheer coach.

Working with young students daily, Dombrowski said she knows many of them choose to not report the bullying.

“We have to make sure they realize they can talk to us. They don’t," she said. "They keep everything inside, they don’t want to tell their parents what’s happening on social media.”

Police told FOX 17 the evidence investigators were able to review from text messages and social media posts did not indicate bullying or any criminal wrongdoing.

Abbott said she's hopeful her tragedy will teach other parents and teens to watch their kids more closely.

"They have to be careful with what they say to each other. I want parents to be more aware, I should’ve been more on Zoe’s Facebook and we should be more aware of what our kids are doing and what they’re saying...”

Michigan is one of 34 states with laws criminalizing cyber bullying.