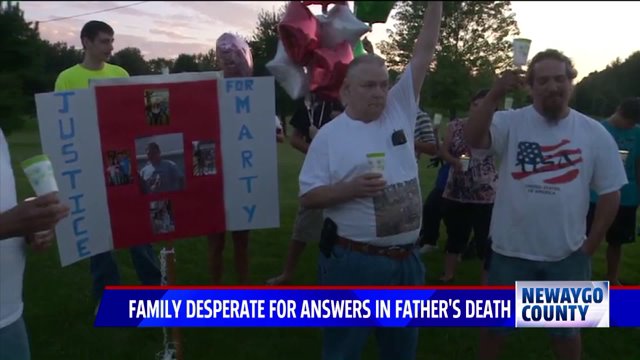 NEWAYGO COUNTY, Mich. -- It's been over two months since Martin Duram was found dead of multiple gunshot wounds inside his Newaygo County home, but even this far down the road, his family doesn't know much more than they did on the day the homicide took place.

Tonight, family and friends gathered just a few houses down from Duram's to hold a vigil - not only to honor his memory, but to call for answers.

The 46-year-old father of three was found dead on May 13th inside his home in the 9000 block of East 128th street. His wife Glenna was also found inside with serious injuries, but survived. As of now, police have only announced that they are investigating the case as a homicide. They also released that a Ruger pistol was found inside the home, believed to be the murder weapon according to Charles.

Martin's parents told us their son had no known enemies. However, they also said an autopsy they received revealed that Martin has been shot five times, three of those shots coming at close range. They believe whoever did this to their son was undoubtedly out to kill him.

The Duram family hasn't had any contact with Glenna since the incident happened, and their luck with investigators hasn't been much better. Right now, all they want is justice.

"When your son is murdered you tend to want answers," said Martin's mother, Lillian Duram. "We should've had him longer but, that happens."

Anyone with information on the case is asked to call state authorities at 231-873-2171.