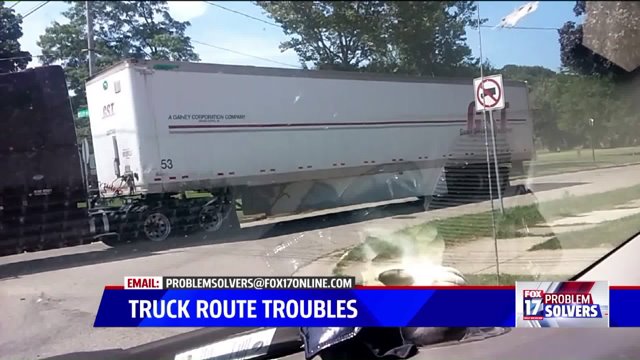 GRAND RAPIDS, Mich. – It’s a problem neighbors in the quiet residential neighborhood down Valley Street have dealt with for nearly five years. Semi-trucks, making their way down narrow roads, when they aren’t even supposed to be there in the first place.

“May of this year it escalated, June it increased,” said Jennifer Lardie, a resident making a strong push to get the problem fixed. “The issue itself is there are signs posted in the residential neighborhood that state this is a no truck zone.”

But the signs haven’t seemed to make much of an impact on the over thirty trucks that have illegally driven down Valley this month alone, often times waking up neighbors in the early morning hours and holding up traffic.

“We’ve been woken up at 3 a.m. by the trucks,” said Jennifer Sanford, another resident of Valley Street who is working closely with Lardie to get the issue resolved. “It scares me they’re going to side swipe my car and keep moving on.”

The neighbors believe many of the trucks are coming from or heading to the nearby Coca-Cola plant on Garfield. But the onus isn’t completely on Coca-Cola.

In an email exchange with Lardie and Sanford, a Coke representative said: “We have taken steps and are continuing to take steps to do everything we can to make sure trucks delivering to Coca-Cola are not on residential streets.  These are not Coca-Cola owned and operated trucks.   Also, not all of the trucks coming down the streets are coming to Coca-Cola.”

Coke will typically hire outside trucking companies to ship orders. Lardie told us Coke has been helpful in matching resident’s complaints with their intake logs, but the issue has still persisted despite the company owning up to these being their trucks often times.

As for city officials, residents haven’t received much help there either. FOX 17 was told today by the Traffic Safety Department that a plan is currently in the preliminary stages. That plan includes adding two new signs indicating no truck zones, and the addition of two directional signs guiding trucks to approved truck routes. But so far, not much has been done to actually put the plan into action.

“We were told they were going to move and replace the sign and that was over a week ago,” said Lardie, “and nothing has been done yet.”

As for the police, even with their best efforts, Lardie and Sanford concede it would still be a difficult issue to rectify.

“They said they would send extra patrols,” said Sanford, “but you know – how do you schedule that when you don’t know when the trucks are going to roll down?”

But for Sanford, Lardie, and many others in the neighborhood, the issue is purely about safety.

“When they fly down the street because they know they’re not supposed to come down it…you wonder, if my kids are out here - are they safe?” said Sanford. “Will they be able to see them?”