Two Newaygo men and a dream 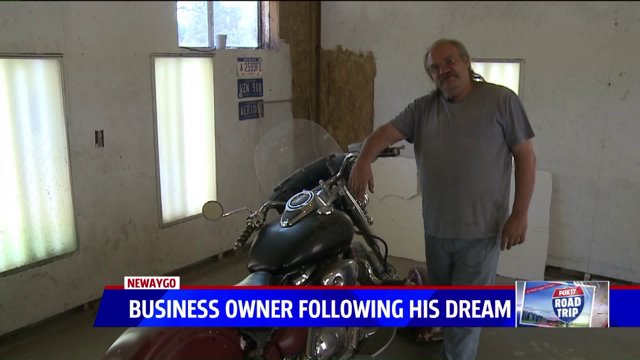 NEWAYGO, Mich.-- There are very few people in the world today that are actually doing what they like or enjoy for a living. Many of us wake to the same old grind. A boring, mindless job because it's what we do...it's what we know. But for two Newaygo men who are following their dream of working on cars, they enjoy every waking day.

Bob Tatro has been a heavy duty diesel mechanic most of his life. He has worked in Florida on Walt Disney World motor coaches doing both electrical and mechanical repair. When his step son Jaime died of cancer a few years ago, Bob decided to come back home to Michigan and take over the tools, equipment, and mechanics business Jaime left behind. Knowing that he couldn't do it alone, Bob hired a younger Navy veteran who was eager to learn the trade of fixing cars and doing bodywork, so he brought on Matt Triestram. Matt spent the better part of his adult life in the United States Navy and was discharged in 2006.

The two work daily side by side fixing and repairing neighbor's cars, family's cars, or other work and requests that arrive on their doorstep. They basically set their own hours, work at their own pace, and take it slow and easy in a non-stressful environment...something we all long for! While Matt never had any formal training in car repair, he learns at his own pace from Bob, the true veteran repairman. Engine repair, bodywork, cars, motorcycles, the two will tackle just about anything. In fact, they are working on building what they refer to as a concept car. In short, something that doesn't exist (except only on paper). Both are taking a 2007 Volkswagon GTI car and will add custom molded and pre-fabricated fenders, front spoiler, mirrors and wheels from a Porsche, and a suped-up racing engine that will turn additional horsepower. It will be their signature car for the business they call Northwoods Diesel.

Bob has also been involved with building racing vehicles and restoring cars most of his life. He's worked on a 1955 Roadster and a 1968 VW Sprint car just to name two. He tells me the last few weeks have been crazy busy for him and Matt with plenty of work. While the two have literally been working day and night on various projects, they prefer to work in the evening and overnight hours during the summer when temperatures typically soar and there is no air conditioning in the shop.

If you'd like to contact Bob Tatro or his business Northwoods Diesel, you can contact him at (231) 414-0940. They work out of a large pole barn on his property along M82 just outside of Newaygo in Newaygo County.