A rare look inside the South Haven lighthouse 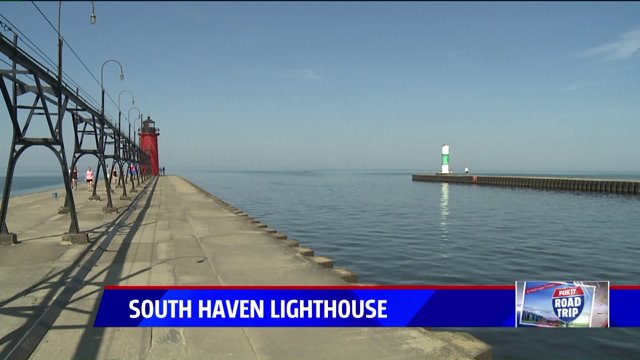 SOUTH HAVEN, Mich.-- Any time we can go inside something that is usually closed to the public, West Michigan Stories jumps at the opportunity to bring the excitement to the forefront. Every great once in a while the door may be opened on the lighthouse at the end of the South Haven pier, but most of the time it stays sealed. We hitched up with HASH, an acronym for the Historical Association of South Haven, who took control and ownership of the lighthouse from the Coast Guard in 2012 and ventured inside this historic structure. That said, the city retains ownership of the catwalk...one of only four original ones left in the state, and the Army Corps of Engineers owns the actual pier itself.

The original wood structure pier and lighthouse were built in 1872, but has been lengthened, upgraded, or refurbished a few times. Unlike many other Michigan lighthouses, the lighthouse keeper did not live inside this structure. His home was actually located off the pier about a block away. To see the inside of this iconic structure was both fun and challenging. It has three levels all accessible by steel ladders. Trying to hold a camera while climbing and holding on to the ladder was a trick. While the outer steel structure and shell may look like a fortress, the visions on the inside tell a different story. Steel seams are rusting, part of the second floor actually rusted through, and one can tell that it needs some TLC and refurbishing. That's also part of this story. HASH is in the middle of trying to raise the necessary $300,000 to restore the lighthouse to its original beauty and integrity. They have already raised more than $200,000.

On the inside sandblasting and painting will need to be completed, but despite the need for attention, it's like stepping back in time climbing the ladders and making your way to the top where the fifth order Fresnel beacon (or light) is still in place that was made by Parisian glass makers years ago. Through the spider webs and bugs, we make it outside on the rail and walkway enjoying the 360 degree view. Looking east to the beach, the pier and catwalk, north to the north pier, to the west the vast waters of Lake Michigan, and finally to the south where just a few miles down the coast is the Palisades Nuclear Power Plant. You can click here to see almost live images from the top of the lighthouse to experience what we saw.