Could expulsion hearings be next for embattled state reps? 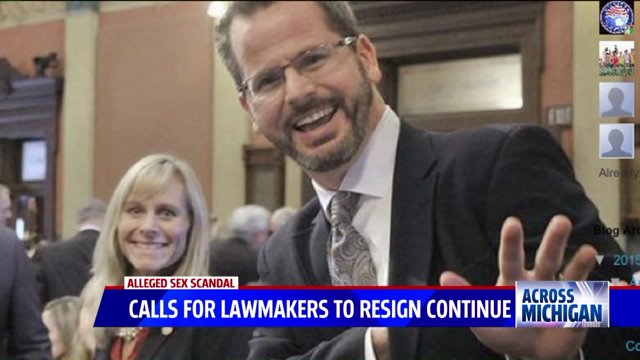 LANSING, Mich. -- It's a rare occurrence that's happened just twice before in the history of the Michigan legislature, but some Lansing insiders seem poised to think an expulsion hearing could very well be the next step for embattled conservative state representatives Todd Courser, R-Lapeer, and Cindy Gamrat, R-Plainwell.

Since news broke Friday of the two lawmakers' alleged extramarital affair and the outrageous attempt to try to cover it up, Courser has stated publicly he refuses to step down despite several calls for both he and Gamrat to resign their positions in the state House.

Gamrat has yet to speak publicly about the situation.

The freshman lawmakers and tea party conservative favorites are also being investigated by the House Business Office to determine whether they used taxpayer money and resources in their effort to cover up the alleged affair.

There is no legal threshold or requirement that needs be met in order to have an expulsion hearing.  Aside from a hearing, an expulsion requires a two-thirds majority vote of fellow chamber members in order to boot another member out.

Susan Demas, political analyst and editor of 'Inside Michigan Politics' said expulsion hearings, while few and far between, are far from out of the question in this particular case.

“I think it’s very realistic, when you’re talking about abusing your office and wasting taxpayer dollars, those are certainly grounds to hold hearings," Demas told FOX 17.

In 2001, former Sen. David Jaye, a Republican from Macomb county on the east side of the state was the first Senator ever to be expelled. In that case, Jaye was up against more than just allegations.

"With Sen. David Jaye from Macomb county, it was after numerous embarrassing incidents; drunk driving charges, domestic violence charges," she said. "The Senate held a hearing and did vote to expel him.”

The buzz over expulsion talks are happening at the same time Courser now alleges to have text proof he was being blackmailed into sending out a phony email to cover up and draw any attention away from his alleged affair.

But Demas said with little, if any, support for Gamrat or Courser in the legislature, getting the necessary two-thirds majority vote likely would not prove to be too terribly difficult.

“I think if this goes down the road of an expulsion hearing, the writing is on the wall with how this is going to go; they do not have friends in either party," she said.

"But we don’t know what else is going on… and of course you have Rep. Courser throwing a monkey wrench into everything with his own allegations he was being blackmailed and there’s a conspiracy."

In addition to the ongoing House investigation, on Wednesday House Minority Leader Tim Greimel, D-Auburn Hills, sent a formal request to Attorney General Bill Schuette to investigate the criminal allegations and counter-allegations levied at, about, and by Reps. Courser and Gamrat.

If an expulsion hearing were to happen, it would likely be after the House investigation is completed.

**Correction: This story has been edited to correctly reflect that two lawmakers have been expelled in the history of the Michigan legislature, not one. The only Senator to be expelled was David Jaye. Monte Geralds was the first and only lawmaker in the House of Representatives to be expelled. He was expelled from that body, after being convicted, in 1978 for having embezzled $24,000 from a client in his law practice