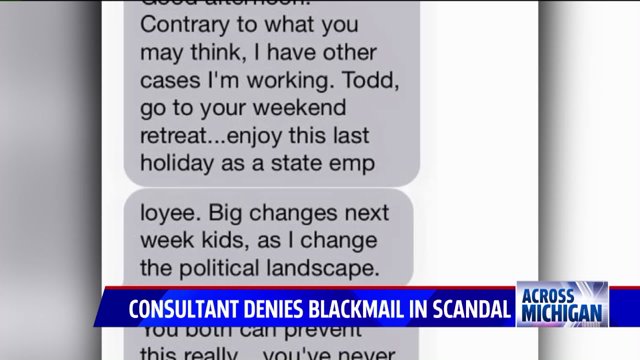 LANSING, Mich. -- In text messages released to the public through his Facebook page this week, Rep. Todd Courser identified a political consultant as being at the center of a plot being concocted to remove the embattled tea party lawmaker from office.

David Forsmark, owner of Winning Strategies in Flushing, was identified by name by Courser, R-Lapeer, in a Facebook posting. Courser says Forsmark conspired with the representative's former staff members to blackmail him into resigning over an affair with fellow tea party conservative, Rep. Cindy Gamrat, R-Plainwell.

"Based on select information he released and who he released that information to, he (Courser) has concluded that his former staff worked with political consultant David Forsmark to concoct a plot to remove him from office," read the bizarrely worded statement written in third-person and posted to Courser's Facebook page Tuesday evening.

House Speaker Kevin Cotter, R-Mt. Pleasant, has also ordered an investigation into whether Courser and Gamrat used taxpayer-funded staff or resources to try to cover up the alleged affair.

On Wednesday, Courser proceeded to release screenshots of the text message in question, claiming people had been 'clamoring' for him to post them.

Forsmark told FOX 17 by phone, he was not involved in any blackmail plot and the entire ordeal is the funniest thing that's ever happened to him. He said he doesn't even have Courser's phone number.

"There’s no precedent for this," Forsmark said. "This is like somebody in a mental home came up with a season four for House of Cards.”

After the initial Facebook post went live Tuesday evening, Forsmark said his phone began blowing up with people trying to get in touch with him.

Forsmark told FOX 17 he knows some of Courser's former staff members personally and believes Courser became convinced of his involvement after learning through a Facebook post they had gone out to dinner together.

“I think maybe the Lansing ‘mafia’ just didn’t give him any traction so he decided to put a face to it," Forsmark said. "He knows I know those guys (Courser’s aides) and I’ve worked with them and we’re friends.”

Courser claims he's been in contact with authorities 'over a period of time,' adding that he welcomes an investigation into the allegations made against him.

Lansing political analyst and editor of 'Inside Michigan Politics' Susan Demas  told FOX 17 any further allegations coming from Courser should be taken lightly, adding he's already damaged his reputation after admitting to sending out a fake email to cover up his alleged affair.

“We’ve already established that Rep. Courser has been involved lies before with this email claiming he was having public sex with a male prostitute," Demas said. "To accuse other people of wrongdoing, I think we have to be very hesitant of naming the names he’s naming because he has a credibility problem.”

Demas said it's likely to expect expulsion hearings soon if the two lawmakers continue to refuse to resign.