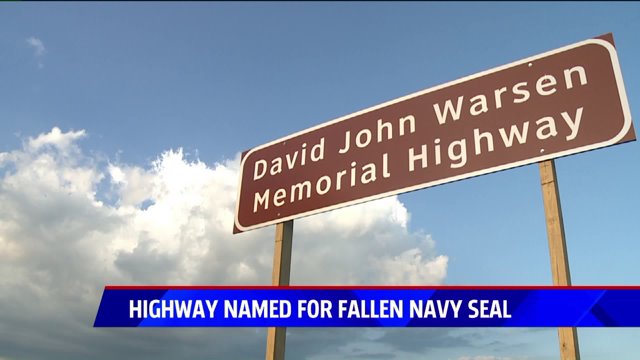 Saturday evening, a portion of M-6 was dedicated to a man who gave his life protecting our country.

"Today means so much to our family. Everyone coming out for us we're just here to celebrate his life," said David's brother, Kyle Warsen.

Petty Officer Second Class David Warsen lost his life along with ten others on August 16th, 2012 when his helicopter was shot down over Afghanistan.

Saturday afternoon, David's legacy came to life as family and friends remembered David with a ceremony, followed by a drive on the portion of M-6 that was dedicated to the Navy SEAL's life.

"The truth of the matter is, I hate that the highway was dedicated to my son because I want my son here, that's the truth," said David Warsen's father, Dave.

"It's a way I take to work everyday. I passed it a couple times and all I do is smile," Dave said.

The bill for this highway memorial was introduced back in October of 2014, nine months later, it was signed into law unanimously by both the House and Senate.

"On the way to work, to their football practice, to their first semester of college, he will be present in the minds who travel these highways on an everyday basis," said John Vroon, David's uncle.

The Warsen family says this memorial highway wouldn't be possible without the Blue Star Mothers of America.

There is a memorial foundation set up in David Warsen's name. If you would like to donate, click here.