Expulsion, censure on table as special committee meets this week on Courser, Gamrat 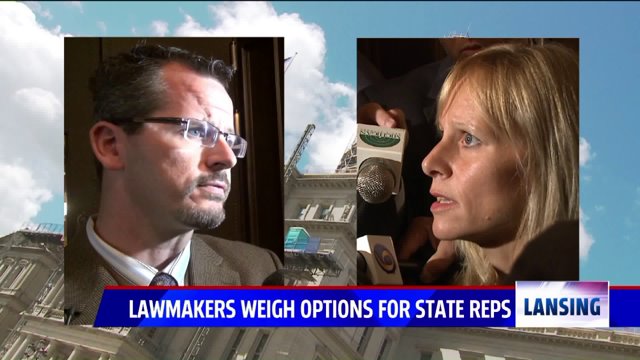 LANSING, Mich. — When a special House committee meets Tuesday morning for a rare and historic disciplinary hearing, six lawmakers will begin to determine what should happen next for embattled Reps. Todd Courser and Cindy Gamrat.

The bi-partisan committee made up of four Republicans and two Democrats will ultimately provide a recommendation for lawmakers to vote on in the full House.

There are three possible outcomes to consider: Expulsion, censure or—while unlikely—the committee could choose to take no action at all in disciplining Courser and Gamrat over their extra marital affair and bizarre attempt to cover it up using their taxpayer-funded offices.

A two-thirds majority vote in the House would be required to expel a lawmaker.

Several lawmakers, along with constituents, have called for the two representatives to resign. So far, both have refused.

Expulsion of state law makers is extremely rare. It's happened just three times in the history of the Michigan Legislature.

The first instance was so long ago, most of the recent reporting on expulsion history in the state failed to mention it. In 1887, the state House voted to expel Rep. Milo Dakin of Saginaw after he was accused of bribing his colleagues in exchange for votes.

The Journal of the House of Representatives detailed proceedings from April of that year in which Dakin apparently created a list of legislators who he thought he'd have to pay in exchange for votes. The bribes ranged from $5 to $25.

The next expulsion wouldn't happen for nearly 100 years.

In 1978, Democratic Rep. Monte Geralds of Madison Heights was ousted from the House after he was convicted of embezzling thousands of dollars from someone before he had been elected to office.

It wasn't until 2001 the legislature was once again faced with the prospect of booting a fellow lawmaker, this time it was Sen. David Jaye, an uber-conservative who served in Macomb County in Metro Detroit.

Jaye, who was charged but never convicted of domestic abuse, also had an extensive record of drunk driving charges and was accused of having sexually explicit pictures on his Senate-owner computer.

He was ousted and remains the only state senator ever to be expelled in Michigan.

Susan Demas, political analyst and editor of 'Inside Michigan Politics'  said last month that with little, if any, support for Gamrat or Courser in the legislature, getting the necessary two-thirds majority vote for expulsion likely would not prove to be too terribly difficult.

“I think if this goes down the road of an expulsion hearing, the writing is on the wall with how this is going to go," she said.

The special bi partisan committee created by a resolution passed in August is made up of six lawmakers from across the state including:

McBroom, chair of the committee, called the situation last Tuesday a very solemn and sober occasion.

"This isn't about politics, this is not supposed to be a celebrity show. This is about the integrity of the institution," he told reporters.

However, making comparisons to previous instances of expulsion could be considered irrelevant because there is no legal threshold defined in the state Constitution, McBroom said last week.

"The people of this state have explicitly given authority to the House of Representatives and the Constitution to police itself. In order to maintain faith with the citizens of Michigan, we have this obligation," he told reporters.

McBroom said neither Gamrat nor Courser will be subpoenaed to testify during committee hearings but will have the right to do so if they are inclined. McBroom said the committee will utilize oath as seen necessary, adding members will operate "with the utmost fairness" and "won't tolerate anything less."

Asked about comments made by Courser in a statement last Monday, who called the entire process a "kangaroo court," McBroom responded saying his comments show a complete lack for understanding how the committee functions.

"We are not a court," he said. "So as far as an allegation in that this is a Kangaroo court, I think it's extremely unfortunate anyone would make those kinds of statements before we've even convened."

Courser and Gamrat misused their taxpayer-funded offices to cover up their affair engaging in actions that were 'deceptive' and 'deceitful', according to summary findings of a House Business Office investigation.

The two lawmakers have been embroiled in scandal since early August when audio recordings obtained by the Detroit News revealed Courser, R- Lapeer,  was planning to distribute a fictional email alleging he had sex with a male prostitute in order to hide his relationship with Gamrat, R- Allegan County.

It's unclear how long it will take to complete the hearings process.

At least two hearings are planned this week.