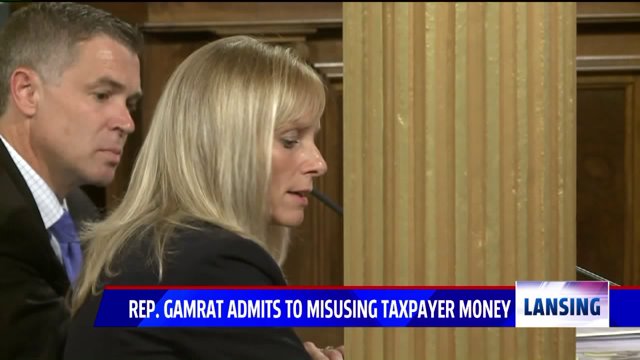 "I agree with the House Business Office finding of official misconduct as well as this misuse of state resources," she said. "In my opinion, censure is an appropriate resolution for me my family and the people in the 80th district who I serve."

"The people in Allegan County in Michigan are truly remarkable and I can't thank you enough for the compassion and understanding which you have shown me and my family.... throughout this very difficult situation," she told a committee.

"Your grace and forgiveness has been undeserved and will never be forgotten by us."

During her testimony, Gamrat also admitted to knowing about an 'over the top' email, referring to the cover-up letter sent out by Courser, but she claimed she didn't know the contents of the email beforehand.

She also admitted staff in her and Courser's combined offices were treated poorly.

Courser was also seen in the audience of Tuesday's committee hearing but has not testified yet.

Republican House Speaker Kevin Cotter's office has recommended Courser be expelled from his position and Gamrat be censured.

Swartzle, however, made it clear he was not speaking for Cotter but said Courser's past and present behavior is so outlandish that any further credibility as an elected official is shot. He said Gamrat has shown remorse and has even held office hours, warranting her a second chance.

Rep. Kurt Heise, the committee's vice chairman said he wasn't surprised by the recommendations made.

The bi-partisan committee made up of four Republicans and two Democrats will ultimately provide a recommendation for lawmakers to vote on in the full House.

“For me, I think that the grounds for expulsion exists for both, but the case, there’s a case to make for censure for one," said Rep. Ed McBroom, the committee's chairman.

Committee members tell FOX 17 censure could result in a number of actions being taken, including either Gamrat or Courser becoming removed from committees, or their offices could receive less money to operate.

There are three possible outcomes to consider: Expulsion, censure or—while unlikely—the committee could choose to take no action at all in disciplining Courser and Gamrat over their extra marital affair and bizarre attempt to cover it up using their taxpayer-funded offices.

A two-thirds majority vote in the House would be required to expel a lawmaker.

Several lawmakers, along with constituents, have called for the two representatives to resign. So far, both have refused.

Expulsion of state law makers is extremely rare. It's happened just three times in the history of the Michigan Legislature.