GR golf course to get a big makeover 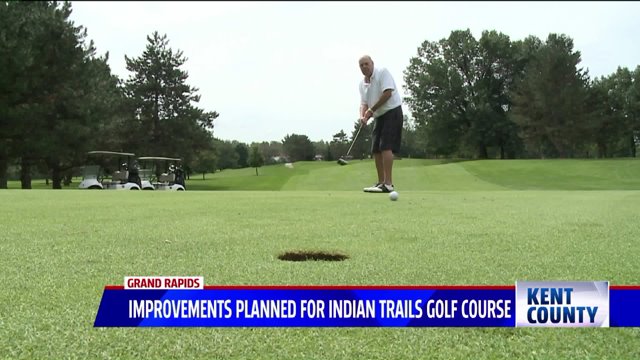 GRAND RAPIDS, Mich. - Indian Trails Golf Course will soon get a big makeover, $2.7 million on upgrades and a new driving range funded by the city.

David Marquardt, Director of Parks and Recreation, said it's a plan that's been 20 years in the making.

"This isn’t just a golf course, this is a valued open space that people value and cherish," said Marquardt. "It’s another way for people to recreate in our city and it’s important for us as we’re thinking about providing recreational services."

Indian Trails Golf Course General Manager, Lance Climie, said there has been some controversy over which municipality should get the money.

"Anything that costs a lot of money is going to create a negative aspect for individuals," said Climie.

It's a multi-million dollar project and it could be a tough sell for the city, especially when many roads still need to be fixed. But the city of Grand Rapids and golfers we spoke with view this as an investment for the future, saying the course actually brings in revenue for the city.

"The obvious answer has always been to install a driving range to increase cash flow," said Climie.

Indian Trails is teaming up with the Department of Parks and Recreation to transform and restructure their golf course with several million dollars from the city's Transformation Investment Fund. Climie said the project will generate significant revenue, helping replace their maintenance building while adding upgrades to their club house and parking lot.

"So when you’re looking at a long term solution would you rather it go fallow and then spend $60,000 a year to mow it? Or invest 2.7 million and have a facility that will be good going into the future as far as we can see," said Climie.

Ed Berkley has been golfing at Indian Trails for 15 years and believes this is the best use of the city's money.

"Absolutely, there's no question about it," said Berkley. "I think golfers have been asking them to do something about it for the longest time."

However, not everyone is as convinced. Tom Hendrix has been a member for the past two years and said he enjoys the course as is.

"I'd be content just the way it is," said Hendrix. "I guess I'd like to see other needs the budget might have before I was certain of the use of those funds."

There are a number of options on the table for improvements, and Indian Trails is hosting an open house Monday, September 17th at 7:00 p.m. where you can give your input and get a look at some of the plans.

Climie said even with renovations, Indian Trails will still be an 18 hole golf course but it will change from a par 68 to a 65.