After 72 years of searching, we know what happened to The Spirit of South High 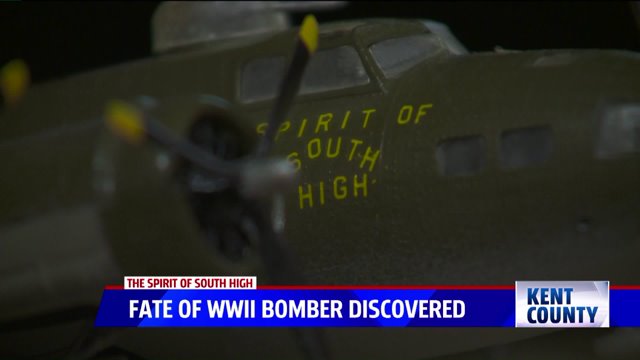 GRAND RAPIDS, Mich. - After 72 years of searching, we know what happened to the The Spirit of South High, a B-17 bomber paid for in full by the 1943 graduates of the former South High School in Grand Rapids. After the attack on Pearl Harbor, propaganda quickly encouraged everyone do their part for WWII.

Sandra Warren, author of "We Bought a WWII Bomber," has been looking for the school's namesake for many years.

"The spirit in this school is just amazing, we’ve been there from the very beginning," said Warren.

After Pearl Harbor, the students of South High School were determined to raise $75,000 for a fighter plane. Donations quickly exceeded their expectations, and they raised nearly $375,000, enough to pay for a B-17 bomber to help with the war effort.

Arthur Blackport, 1947 graduate of South High, said it's unbelievable to think a bunch of high school students bought a war plane. "I didn't think I would do something like that," said Blackport. "I thought, if somebody else could do it, we could, too."

"If the kids came home and said, We're going to raise money in 12 weeks and buy a bomber that costs $300,000, you're gonna look at them like they're crazy," said Warren.

The bomber, appropriately named The Spirit of South High, was said to have flown off to war on April 6, 1943. Warren remembers her classmates listening intently to the radio and watching movie reels while imagining their B-17 in action. It's whereabouts would eventually only be left to rumor and speculation.

A military report found by one former South High School graduate claims the plane never actually made it to war. The report said The Spirit of South High was used for nearly two years helping train pilots and other personnel before it was destroyed in a crash during an exercise in Meadows of Dan, Virginia.

Warren said before the crash, The Spirit of South High trained more than 2,000 military personnel.

Warren said it was bittersweet to learn of the bomber's history but exciting to learn about its past after all these years. The new discovery pushed Warren to publish the book We Bought A WWII Bomber, articulating the patriotism conveyed by the students and city of Grand Rapids.

More than 220 bombers were purchased by businesses and other entities helping the war effort nationwide.