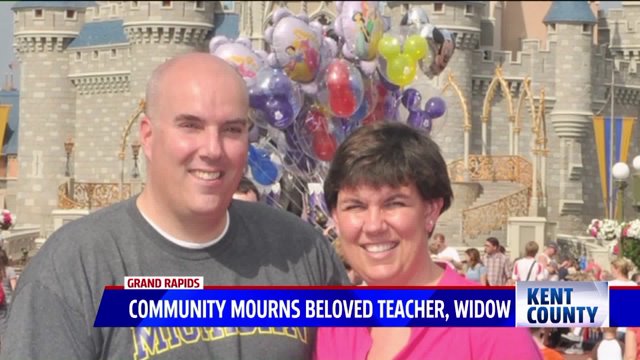 “It’s rare to have even one hero in a family and with Kim and Trevor you had two,” said Jeff Lambert, close family friend.

Northview Public Schools shared their condolences and announced the loss of Kim Slot on their district website, stating she passed away Tuesday night after a battle with cancer.

"The Northview community is deeply saddened by the death of Crossroads’ teacher Kim Slot on September 16. As you know, Kim suffered courageously through a prolonged battle with cancer. The Northview community will miss her more than simple words can express. She was not just our co-worker but our good friend, our neighbor and a loving Northview parent. Memories of her warmth, her spirit, her faith, her strength, her kindness and her humility will be cherished by all who knew her. Our thoughts and prayers are with her family and friends.  Arrangements are pending and will be posted here when they are received."

Lambert, who graduated with Trevor Slot from Northview, told FOX 17 he is honored to have called Kim a friend. He has been a neighbor of Trevor and Kim's for the past seven years, and said he is one of handful of Trevor's close friends from high school who continues to be friends with the Slot's girls and extended family.

“Kim will be remembered for both her fun spirit and her selfless caring for other people – whether it was her two girls, Kate and Abby, or the hundreds of students she impacted as a teacher at Northview Middle School or her friends and family that felt her love," said Lambert.

"The physical toll and repeated bouts with cancer over the past five years could never keep her down and she was determined to fight it, without complaining and often with a smile on her face.  That’s who she was – someone you’d want to call your friend, and I was honored to call her mine," he said.

In a statement posted on Facebook, the Northview Wildcat Football team wrote the following:

"Please join us as we offer our thoughts and prayers to the family of Kim Slot who passed away last night," the statement reads. "Kim was a beloved teacher at Crossroads Middle School who valiantly fought cancer and is survived by two beautiful young daughters.

We ask that you rally around this family, who has already survived so much after the death of Northview's own, fallen police officer Trevor Slot."

The Walker Police Department is among several police agencies that have shared their condolences for the family online, including the Kent County Sheriff's Department and the National Police Wives Association.

"The Walker Police Department was saddened to hear about the passing of Kim Slot, wife of fallen Walker Police Officer Trevor Slot. She will forever remain in our hearts as a member of our law enforcement family. Our thoughts and prayers are with the girls and the Slot family at this very difficult time."

You may remember, Trevor slot was killed several years ago along I-96 while responding to a call in which two heavily armed bank robbery suspects were being pursued by police. FOX 17 spoke with Kim's cousin Tim Huizen who said Kim's last phone call to her husband was just before he was killed, explaining that her cancer had returned.

Huizen said family is planning for Kim and Trevor's two younger daughters to live with their grandparents, Kim's parents, in Kim's home.

“Much like Trevor, Kim left a positive impression on everyone she met and you can see that light and personality shine through her daughters, Kate and Abby," said Lambert.