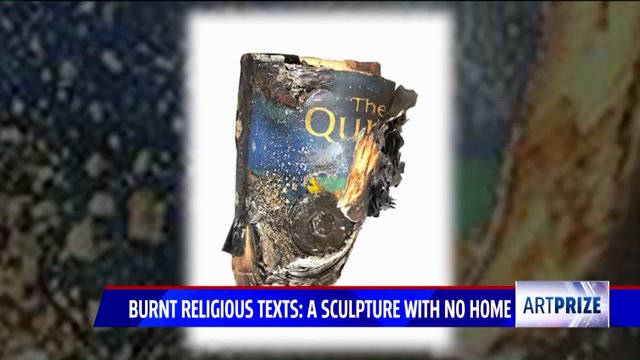 GRAND RAPIDS, Mich. – Just days away from the kickoff of the seventh annual ArtPrize competition, perhaps one of the most fascinating and certainly controversial entries is without a place to be displayed.

“Paradise Built on the Bones of the Slaughtered,” a sculpture created by Atlanta-based artist Nabil Mousa, features the burnt remains of major religious texts. Meant to be a commentary of the 9/11 attacks, the burnt books are scattered up and down metal towers, which symbolizes the loss of life from every religion in the attacks, Mousa says.

Many venues are shying away from displaying the piece during this year’s competition. Mousa believes their decision is stifling the true message behind the sculpture.

“Good art will force you to have more questions than answers,” he said. “How can you possibly deny us of what is right, which is to be able to express ourselves in art?”

Of the more than 160 venues featuring entries during this year’s ArtPrize, there are 10 that must be approved by both the venue’s curator and a city art advisory committee.

Mousa was turned down from the City Hall/Calder Plaza venue a few weeks ago. After that, he began searching for private venues -- churches, bars and other sites -- with no success.

“My mission with this is to open up dialogue,” Mousa said. “So give me the opportunity. Talk to me and then make a decision. For you to completely block me out is unfair.”

Many of the private venues FOX 17 spoke to that had been corresponding with Mousa cited lack of space as well as the nature of the piece as reasons for their denial. But Mousa feels they’re misinterpreting the message.

“We could make a difference,” he said, speaking directly to the venues with open space. “Let’s do it. Why couldn’t we bring together the Jewish community, the Muslim community, the Christian community here in Grand Rapids to start this off, and actually open up dialogue about what it is that we have in common?”

ArtPrize officials say that owners of private venues have final say over the pieces displayed. It’s up to the venues and the artists to collaborate; ArtPrize has nothing to do with that process that lasts from April to June.

“I just want a chance,” Mousa said. “So, for the rest of those venues, please look at the project. I would love an opportunity to talk to somebody and feature it.”

ArtPrize will feature 1,500 entries created by more than 1,700 artists.