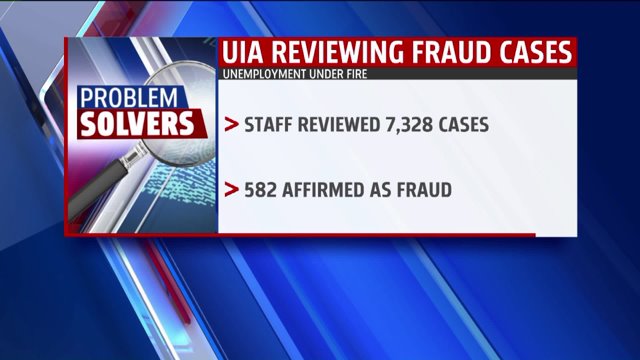 MICHIGAN -- In August of this year, the Unemployment Insurance Agency disclosed to the FOX 17 Problem Solvers it was pulling back 8,500 cases from the Michigan  Administrative Hearing System for unemployment staff to look at instead.

These are cases previously flagged by the agency's $44 million dollar computer system for an alleged discrepancy. Judges would have looked at them closer. However, there is a backlog of cases waiting to be heard.

According to UIA spokesperson Lynda Robinson, so far, staff have reviewed 7,328 cases. Of those, 582 were affirmed as fraud. That's about 8 percent. Terri Sims of Kalamazoo is one of the vast majority of people who've now had their penalties cleared.

"I'm just relieved. I can breathe again. I can eat again. I can sleep again, because you stay awake at night just worrying. Ya know, what they're going to do," Sims said.

Faced with a massive fine from the state unemployment agency, Sims said she feared the state would garnish her wages or take her tax returns. That's something that’s happened to many people the FOX 17 Problem Solvers have talked with.

Sims only collected $6,800 total in benefits, which the state approved. But the agency's $44 million computer system later accused her of lying to get benefits and charged her four times what she originally collected plus interest.

Sims said, "No hearing. Nothing. I was just automatically accused."

Sims appealed, but her case fell into the massive backlog that would have taken months for a judge to hear. Her case was one of the 8,500 sent back to the UIA from the administrative hearing system.

Again, the agency determined Sims didn't file fraudulently. However, her fight continues as the agency is still trying to recoup the original $6,800 she was approved for and collected. She said they're disputing why she left her job. She filed an appeal and is optimistic a hearing will set the record straight.

When we first began our Problem Solvers investigation in the spring, there was a backlog of nearly 30,000 cases waiting to be heard by a judge.

For a number of these cases, additional information came in that allowed the agency to reverse the original decision.
Also, anyone entitled to a refund after their case is reviewed will receive a refund.