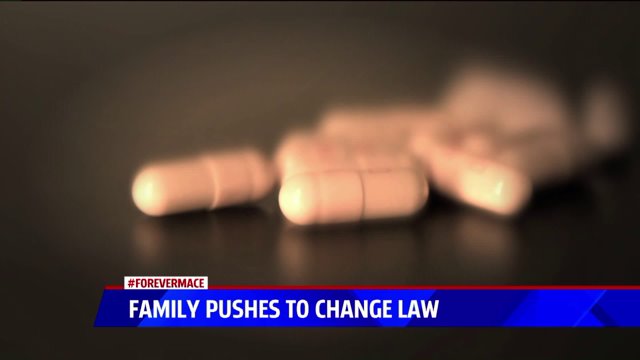 Lori Mizwicki wears a reminder of her son around her neck displaying his 'shining moment.'

LANSING, Mich. — Every day, Lori Mizwicki wears a reminder of her son around her neck.

With his hands raised above his head and one foot in the air on the football field, the necklace is emblazoned with a silhouette of 16-year-old Mason, from what he considered to be his "shining moment."

On Monday—nearly nine months to the day she learned of her son's death—Mason's mother walked out of a House Criminal Justice Committee hearing in Lansing feeling the same way.

"Like my son had his, this is my shining moment," she said.

Mizwicki, sitting alongside Mason's aunt Brandi Huyser, testified to lawmakers about the need to amend the state's 'Good Samaritan' law to include exemptions protecting minors or their friends from being criminally charged if they try getting medical treatment for a prescription pill overdose.

The state's current 'Good Samaritan' law protects individuals under 21 years of age in alcohol-related medical emergencies, and it's a law that could've been the difference between life and death for Mason, his mother argues.

The stand-out student athlete and popular Watervliet junior was found dead Jan. 1 from an apparent prescription drug overdose. He was at a New Year's Eve 'Skittles' party the night prior where he consumed a lethal dose of methadone.

“We’re not condoning the use of prescription drugs," Mizwicki said, adding she believes the friends who were with her son the night of his overdose were too afraid to call for help.

"These kids need to know that when bad choices are made, they have options.”

Drug overdoses now kill more teens in the United States than car crashes, according to the most recent data compiled from the Centers for Disease Control.

Further data shows more than 40 people in the United States die from an overdose of prescription pain killers each day.

“This is a huge issue, it impacts families across Michigan and that’s why we need to pass it now," said Rep. Al Pscholka, R-Stevensville, who introduced the bipartisan legislation.

“We have support from Democrats, Republicans, social workers, law enforcement; there’s lots of different groups who have come together to really support this initiative.”

Aside from amending state law, Mason's family and friends have been working to raise awareness of the issue throughout the community by placing billboards across Berrien County with the message "Save a life. Know the act." The family said they've also received an incredible outpouring of support through a Facebook page set up in honor of Mason.

“The things these kids are dealing with today are things we did not deal with," Huyser said. "Today there is this feeling they will be in so much more trouble if they were to call."

The Criminal Justice Committee did not vote on the bill Monday but Pscholka said he believes it will likely be passed next week. Full passage of the law is anticipated before the end of October, he said.