Documents: Shooting victim’s wife joked about ‘waiting for him to die’ 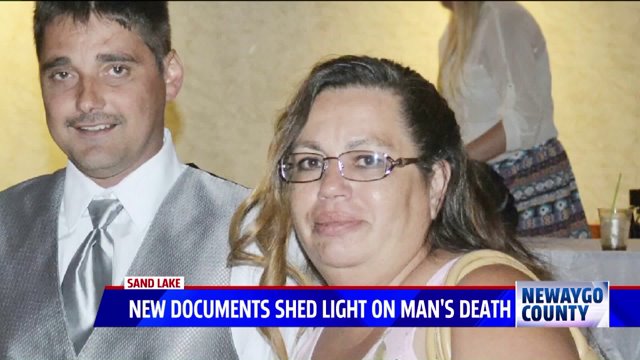 SAND LAKE, Mich. — While police remain tight lipped on a now five-month-old homicide investigation involving a married couple in Newaygo County, case file documents detail a home in disarray the night of the killing and the discovery of suicide notes.

Case files from the ongoing police investigation, obtained by FOX 17 through the Freedom of Information Act, describe the night of May 13 when Martin "Marty" Duram and his wife Glenna were found inside their home in the 9000 block of 128th Street, northwest of Sand Lake.

Michigan State Police on scene at the Duram's Sand Lake home on May 13, 2015.

Marty was shot and killed; Glenna was critically injured and barely alive when she was found.  Autopsy results obtained by FOX 17 show Marty was shot five times, including once in the head, and was found with a clump of hair in his hand.

First responders saw bullet casings on the bed near the victims and said Glenna was taken from the home strapped to a gurney because she was “very combative," according to case files.

While trying to restrain her she said numerous times, “Why are you doing this Marty?" but gave no response when repeatedly asked who had shot her.

Lilian and Chuck Duram, Marty's parents, believe it was a domestic dispute that went too far and reluctantly point the blame toward Marty's wife.

“I feel when you kill somebody, you outta pay the bill," Chuck said. "When you take a gun and you shoot somebody five times, that’s upsetting."

Marty and Glenna both had children from previous marriages.  Police interviews conducted with children of both indicate the couple had a love-hate relationship. Glenna's son told police the couple argued “a lot," usually over money, and that Marty was possessive. Both had quick tempers.

Glenna's daughter indicated to police that because Marty was so “controlling,” his wife had briefly left him for a period of time.

While their children reported seeing them argue, none told police they ever witnessed the two physically fight.

Marty's daughter claims every time she saw her stepmother,  Glenna would say she was "just waiting for Marty to die to get all his money."  In some instances, she'd make the comments in front of Marty and either appeared serious or would laugh about it.

It's a description of their relationship echoed by Glenna's own daughter, who attested the two  “loved to talk s**t."

When asked by investigators if he believed Marty was killed during a botched murder-suicide, Glenna's son-in-law  said, “I don’t buy it. They bicker, but I’ve never seen them get physical before.”

Family said the couple had been married more than 10 years and had been living in their Sand Lake home for more than 15 years.

The two always kept their doors locked, and none of the family had keys to the home, according to documents.

For Marty's mother, Lilian, she said she never imagined outliving her own child.

“I cry every night, and I wake up thinking, What’s the courts going to do, what’s the prosecutor going to do?" she said. "When is this going to be over with?"

Several pages of the couple's gambling records obtained through the FOIA also show the two frequented casinos, but Marty's children claimed their father “would only go because Glenna wanted to,” the case files said.

One document from 2010 showed Glenna gambled nearly $75,000 on slots, more than twice what Marty gambled that same year.

Glenna was in charge of the couple's finances, and statements from several of the couple's children indicate their main source of income was money the state paid to Glenna for being Marty's primary caregiver and Social Security income Marty collected.

Glenna became her husband's caregiver after he was seriously injured in an automobile accident in the 1990s.

Roughly one month prior to his death, Marty learned his house was in foreclosure, according to relatives. Marty's children told investigators Glenna did not always pay the bills and would not tell Marty of their financial difficulties.

For now, investigators refuse to answer any questions regarding the investigation.

No arrests have been made and police have not publicly named any suspects.

But, according to Marty's parents, evidence was found in the days after the killing of apparent suicide notes allegedly written by Glenna in the couple's home, both baffling and curious. The notes, found in a manila envelope in the couples living room, contained letters addressed to each of Glenna's children, “generally advising them (the addressed) that she was sorry and they were signed Love Mom, Love Glenna and Love Mom, respectively," documents said.

When contacted by FOX 17 on Thursday, Glenna's daughter refused to comment.

Relatives of Marty claim Glenna has been out of the hospital for several months, appearing at recent court hearings as the two sides of the family now battle over Marty's will.

Documents show when police attempted to interview Glenna in the hospital in late May, she told investigators she didn't know how she wound up there.