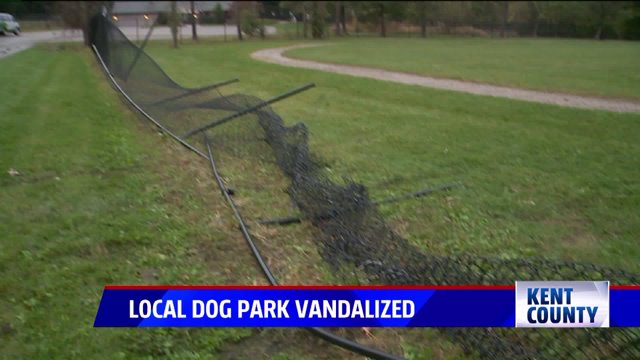 Park owner Pam Stanley said a park member found fences knocked over Saturday morning.  She said someone the property was vandalized sometime after the park closed Friday night. Stanley described feeling "shock and sadness" upon learning of the destruction.

"We've been around for 12 years, and it's a happy place," Stanley said. "So when something like this happens, it affects people."

"It's their park. They take pride in it, and we've got a lot of upset members out there," Stanley added.

Authorities confirmed a group of about five men used golf carts and utility carts to knock over fences. They stole those carts from Quail Ridge Golf Club about a half mile down the road.

Surveillance video from the park is being reviewed in the investigation.

Golf course grounds superintendent Tim Topolinski said he noticed the damage at "about 6:30 this morning. So of course, I drive to our barn, and it was wide open. They broke in and four of our carts were gone."

Topolinksi said in his 17 years at the course, this is only the second break-in.

"I think they're just doing joyriding, because they're not stealing anything. Just getting on carts and driving," he said.

But they left a path of destruction and stole other people's joy in the process.

Stanley said, "We're thinking the people that did this probably live close, close to the park and Quail Ridge Golf Course."

"It's just sad," she concluded.

Stanley said she knows the damage could have been much worse. If you have any information, call Silent Observer at 616-774-2345.