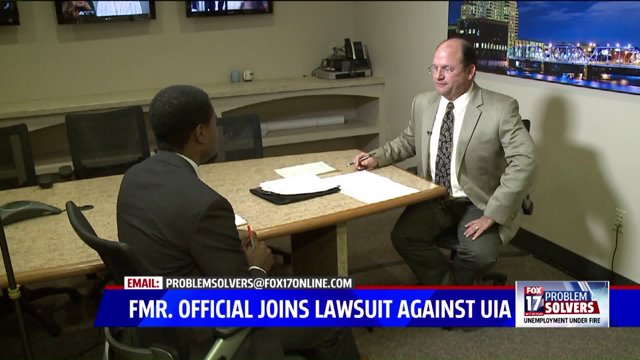 GRAND RAPIDS, Mich. -- A former state employee is speaking out about the unemployment agency's fraud claims against citizens, and he's joined a class-action lawsuit.

Neal Young, of Grand Rapids, knows a lot about the unemployment system. In fact, he served on the Michigan Compensation Appellate Commission for several years.

Basically, his position was akin to an appeals judge. He presided over unemployment cases at the appellate level. One of his jobs was to decide if an employee improperly collected benefits. Young left his post at the end of July 2015 and hadn't reapplied. He told FOX 17 he was torn about what was going on with the unemployment agency, and its fraud claims against citizens.

"[In] 2013 and '14 we started seeing a lot more, the computer-generated issues which really caused some concern among fellow commissioners and for that matter, administrative law judges. We would have some conversations, and it started becoming evident that this was becoming a very big problem of people being adjudicated for fraud when in many cases the fraud case was thin to non-existent," he said.

As we've reported, Pitt McGehee Law Firm in Royal Oak filed a class-action lawsuit against the state. It calls for the state to reimburse thousands of people who've been wrongly garnished and for the state to change its practices.

You may also recall, the unemployment agency took back thousands of cases from the court system for agency staff to review. As we've reported, the agency stated 92% of the cases reviewed so far were found not to be fraudulent. That 92% had been previously flagged by the computer system.

He questioned, "How is that an acceptable system? I mean, if it was a drug test, those 'false positives' would never be used by anybody. So the situation that you're seeing now, those 7,500 cases, that was under the MiDAS system. There was two computer systems used before MiDAS. What was the fail rate of those systems?"

Regarding the current lawsuit and other cases, the state has previously stated it does not comment on pending litigation.

Pitt McGehee Law Firm is holding an informational meeting tomorrow in Novi at the Baronette Renaissance Hotel. It's at 6:30 p.m. The lawsuit is for people who've had their tax returns taken and/or wages garnished.

Follow Darren Cunningham on Facebook
Copyright 2020 Scripps Media, Inc. All rights reserved. This material may not be published, broadcast, rewritten, or redistributed.