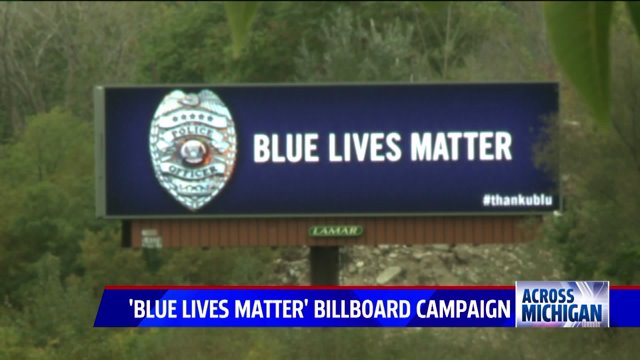 Monday night the digital billboard was first lit in Grand Rapids along I-96 westbound overlooking the Grand River.

“Our law enforcement officers, they matter, but at the same time we also recognize and we know that every citizen that walks here in Grand Rapids, their life matters; every single one," said Grand Rapids Police Department Sgt. Terry Dixon.

Aug. 9, 2014, marked a recent battle cry against police brutality in our country after an officer shot unarmed teen Michael Brown in Ferguson, Missouri. Further assaults and officer killings have some groups taking their own stance on the original message, #BlackLivesMatter.

“I think in some aspects it’s shameful that the brand is being co-opted, but once again it was never meant to say ‘only black lives matter,’” said Darel Ross, co-executive director of LINC Community Revitalization Inc.

“Black lives matter was simply to call attention to a unique set of circumstances that was happening in the black community; and to any way undermine that, or belittle that, ultimately in no way shape or form adds to the relationship between police officers and the black community, or the community at large, because most people get it," Ross said.

“I get it, in terms of what they’re trying to do in terms of this campaign, it promotes a sense of solidarity, but I think you have to be a little more intentional when doing that, if you really are trying to improve the relationships between communities across this country and law enforcement," said Jackson.

“All lives matter right? So that’s why we came to the table in a very I think civil and sober manner with local law enforcement here to say how can we actually work together to improve community police relations."

Both Ross and Jackson are known as diligent contributors to the Grand Rapids' community plan to better police relations with citizens. The multiple-tier plan includes GRPD taking steps to build transparency, for instance in using tools like body cameras and implicit bias training, which Chief David Rahinsky has said he is committed to.

“Here locally, we are fortunate to have great and tremendous partnerships, our partnerships run a lot deeper than some of the other communities," Dixon said. “This issue of the body cameras, and law enforcement being transparent, that’s extremely important to us.”

In regards to body cameras, Grand Rapids City Council recently approved GRPD's increased budget of an additional $350,000 to include 100 more tasers as well as 100 additional body cameras to be worn by every officer.

Lamar Advertising spokespersons told FOX 17 this billboard will be on display through Nov. 6, 2015.