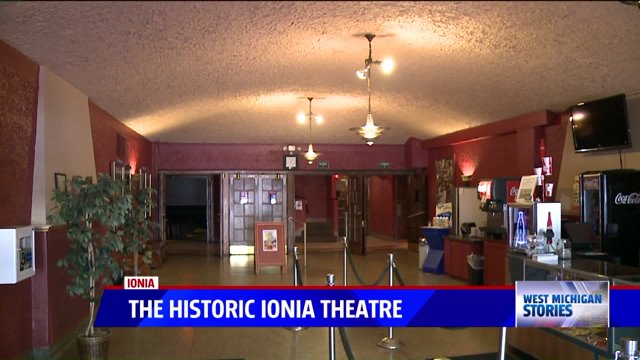 IONIA, Mich. -- It's been a fixture in downtown Ionia since 1931. A staple of sorts...a place to see a first run movie, a place where churches congregate for special events, a place where school plays are held. To some, it's probably far more of a community gathering place.

Build in the Vaudeville days of comedy, the Ionia Theatre was functioning when old carbon arc projectors were state-of-the-art and in use. They actually used a carbon rod that created a bright arc (similar to a welding rod) to project the picture on the screen. It was hot, noisy, and needed an exhaust fan to carry the fumes out of the building. Click here to see how they work. The theater still has one on display!

While some minor renovations may have been done over the years, much of the theater remains the way it was (or very similar) when it was built. The snackbar, lobby, even a foyer where patrons could step briefly out of the movie and grab a snack or use the restroom is still there. The original dressing rooms are still in tact and used today for school plays and performances. That said, times do change. The method in which the movies are shown and projected on the screen have changed dramatically to an all digital format. Movies now are mailed directly to the theater on a hard drive (similar to one you'd find in a computer), and then inserted in to a server. Security codes are provided to prevent premature viewing or theft.

The Ionia Theatre operated in to the early 1980s before having its final curtain call. By 1985, a committee was formed to study the feasibility of reopening the theater. It reopened later that year and has been running full speed ever since. Roof repairs were completed and equipment was updated, including a new DOLBY surround sound system and huge plastic mesh screen. The main theater seats 731 people, with the smaller second theater seating 107. They show first run current movies today!

The reopening of this theater was important to downtown Ionia and the sustainability of the area. Among others, it took Gary Ferguson and his desire to keep it alive and off the chopping block. An electrician by trade, Gary spent many childhood years enjoying the entertainment with friends and family, so he had a personal reason and connection to revitalize it. He was part of the original 1985 steering committee and is the theater director today.

To get more information on show times, see old theater photos, or to contact Gary regarding an upcoming event, or rent the theater for a wedding or party, click here. This is the third West Michigan theater I've been to for a West Michigan Story. Each one is different. Each one has its own flavor, characteristics, and history of what made it great. That said, many of the older Michigan theaters were built in the 1920s and 30s by the Butterfield Company, so to some degree they all share a certain similarity in the way they were constructed or how they look.