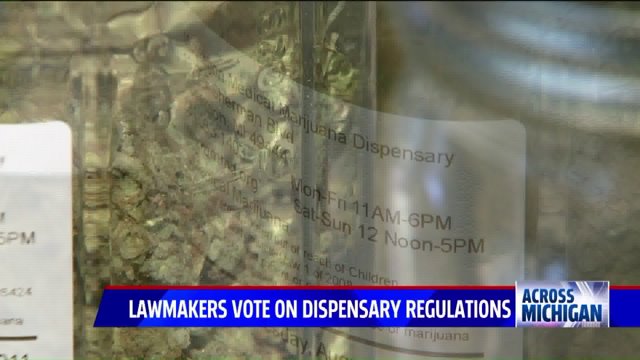 LANSING, Mich. — The Michigan House on Wednesday approved major changes to the state's medical marijuana program that would add regulations to dispensaries, create a tracking system for plants, and further clarify usable forms of medical marijuana.

House Bill 4209, approved by overwhelming 95-11 vote, will create a new state board to license growers and distributors and mandates testing in an effort to add more oversight to end legal uncertainty for both patients and growers.

"I don't understand why my clients that have really good, spotless records are now becoming felons because they wanted to become involved with a medical marijuana program," Matt Herman told FOX 17 in April. The Grand Rapids-based attorney made headlines last spring when he opened a massive medical marijuana grow operation on the city's west side. He now has six buildings for grow operations across the state.

Herman, who has described Michigan's Medical Marijuana Act as "poorly written," said the new regulations will go a long way to solving some problems with the state's current law.

“Any time you’re talking about a large distribution of something, there’s going to be regulations," he said Wednesday. "We need to get it out of the house, regulate it, not just so you can tax it and make your money, but just so it’s safer."

Under the proposal,  medical marijuana dispensaries would be taxed at three percent while patients would pay the state's standard six percent sales tax. Herman says he's still not on board with that and medical marijuana should either be taxed less or not at all.

"Why is it a medication you buy from Walgreens is not taxed but marijuana is?" he said. "It’s not perfect but it’s progress."

Lawmakers on Wednesday also approved measures enacting what's been dubbed a "seed to sale" tracking system for medical marijuana that would allow regulators to keep track of every plant used and distributed to legal dispensaries.

The law passed by the House would address one of the biggest hang-ups in the current medical marijuana laws: defining what “usable marijuana" entails by extending legal protections to legitimate patients who use non-smokable forms of pot. Currently, the law does not include protections for using medical marijuana concentrates or medibles, medicine that some patients have said does not get them high but does cut their pain.

With the framework set in new regulations, Herman foresees more medical marijuana caregivers taking the route he has by opting to take part in large scale grow operations. He argues that it's not only safer for patients but more economical for growers.

The legislation now moves to the state Senate for consideration.

Several coalitions are currently working toward getting the legalization of recreational marijuana on the statewide ballot in the 2016 election. Herman believes House Bill 4209 could open the door to lawmakers taking action to legalize recreational pot sales before the issue even makes it to voters.

Marijuana Support Over Time | InsideGov
Copyright 2020 Scripps Media, Inc. All rights reserved. This material may not be published, broadcast, rewritten, or redistributed.