Mother says contractor took money for her dream kitchen, but never did the work 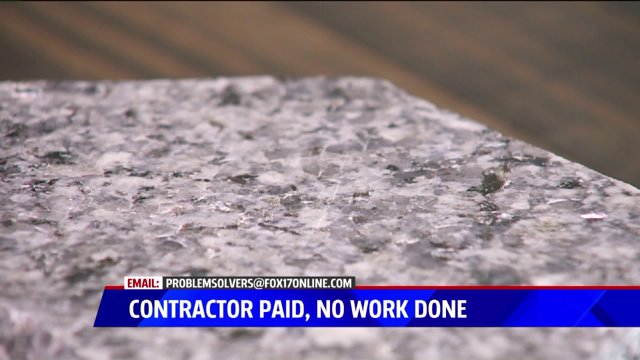 HESPERIA, Mich. — A working mom with two kids hoped to transform her kitchen into the center of their home, so that family dinners would be a tradition her kids would have a fond memory of for years to come.  After a West Michigan contractor took for her $1200 and never showed up, she says her dream kitchen is just that: still a dream.

“We are kind of in limbo. We don’t really know what to do,” Julie Burrell told the FOX 17 Problem Solvers.

The name of the company is Blueprint Granite and they promised to have the work done four weeks from when they received the deposit. The deposit was received at the beginning of September and not only is the work not finished, it was never started.

A small, sampled-sized piece of granite is the only thing Julie Burrell has to show for the dream kitchen she had imagined for her family. She hoped family dinners for her 6-month-old baby boy and her 3-year-old daughter would be a memory set in a backdrop of her liking and to do that she thought Blueprint Granite could get it done for her. The company came highly recommended from one of her husband’s co-workers.

“He had just gotten some work done at his house around Thanksgiving last year. I had been calling around getting quotes and I thought  if somebody we know had him do that work, then there’s no point in me doing more research. We can just call this guy,” said Burrell.

“He said it would be done in 3 to 4 weeks from when he got the deposit,” she said.

It’s been over four weeks according to Burrell and the last time she heard from Blueprint Granite was September 16th, when he said he was waiting for the granite to come in.  Since then the only correspondence is just a string of text messages over the last couple weeks with Burrell asking what’s going on, but no response from Blueprint Granite.

According to the Better Business Bureau, the company has an F-rating for prior complaints for the same thing: unfinished work with no resolution. Kent County court documents show that the owner has been to small claims twice before for a similar amount.

“He had no intention of doing our kitchen. He just stole our money," claims Burrell.  But she is still hoping for a positive outcome.

“At this point, I would prefer he did not step foot in our home anymore. We just either want to get our granite or the money back,” said Burrell.

Until then Burrell is only left with a small piece of what she hoped her kitchen would be.

FOX 17 News has reached out to the owner of Blueprint Granite through several means. As of news time Wednesday, we have not received a comment or statement.