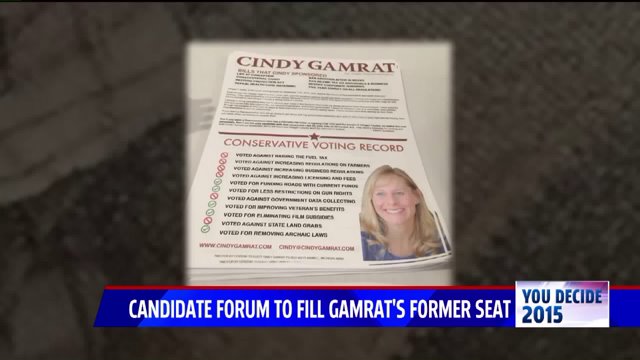 PLAINWELL, Mich. -- Nine candidates took center state Wednesday evening in a packed candidate forum in the race for Michigan's 80th District. The seat was vacated when Rep. Cindy Gamrat was expelled by the Michigan House for misuse of taxpayer-funded resources in covering up her affair with Rep. Todd Courser.

Some voters FOX 17 talked to Wednesday evening were not happy with the choice of candidates.

"Most of them aren't qualified or they're just playing the wrong people," said Arnis Davidsons from the Libertarian Party of West Michigan.

The only Democrat on the ballot is retired trial judge David Gernant of Plainwell.

The candidates touched on issues like funding for road repairs, energy use, ISIS, and marijauna.

Gamrat talked about legalizing marijuana: "I've never used drugs, I never intend to, but then again, I also believe in liberty, and I don't believe it's the government's place to tell everybody else what to do," said Gamrat.

Gamrat also spoke of all the recent coverage of the recent sex scandal. "I know there's been a lot in the media about personal and poor choices and decisions and indiscretions I've had. I want to apologize to you right now for anybody I hurt."

There are currently eight Republican candidates running in this race. Shannon Szukala of Martin Township did not attend Wednesday night's forum.