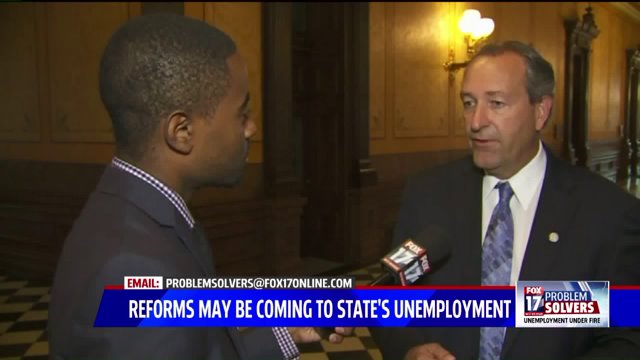 "Over 80 of my colleagues signed on, which is pretty unheard of," said state Rep. Roger Victory (R-Hudsonville), who introduced it. "So it's a very bipartisan package."

The FOX 17 Problem Solvers have been contacting state lawmakers for several months, sending concerned citizens their way, and producing report after report on the agency's "robo-fraud" issues.

In late June, the Problem Solvers sat down with Victory and talked about the agency's documented increased practice of accusing people of fraud and fining them thousands of dollars. However, many continue to proclaim their innocence and say their voices aren't being heard by the agency.

The UIA's two-year-old computer system (MiDAS) is blamed for cranking out thousands of erroneous fraud claims.

In many cases, people said they weren't properly notified. The notice questioning their benefits went to an online account they had no reason to check because their benefits had long ended. Eventually, they got a letter in the mail with a fine.

The bill Victory introduced proposes additional steps in the process:

"We're pleased to bring this bill forward, because it addresses many of the concerns with the unemployment agency," Victory said.

Victory said that the Problem Solvers "communication on it helped us to work on this issue. [It] also brought forth a medium for people to know where to reach out for help. Again, that was a proactive approach. My bill is a proactive approach, and I think this is for the betterment of the service for the state of Michigan."

This is just the first step in the process. The bill now heads to the Committee on Oversight and Ethics for consideration.

(10/14/15) The Unemployment Insurance Agency issued this statement to FOX 17:

“The agency is currently reviewing HB 4982. We appreciate the hard work of Representative Victory and other House members in creating a bill focused on UIA processes related to notification of customers and adjudication of claims. As an agency, we are always looking for ways to streamline our processes and provide improved customer service.”