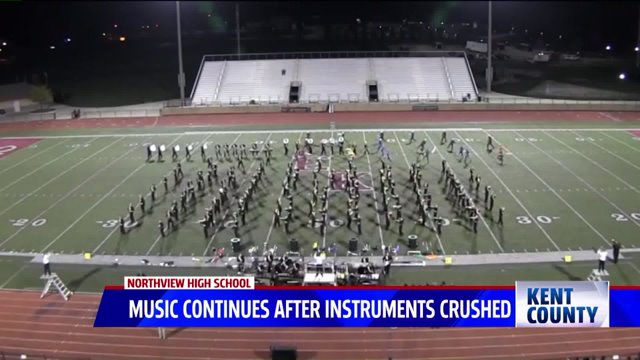 GRAND RAPIDS, Mich. – For the Northview Wildcats, this is the busiest part of marching band season. Tuesday night, their marching band earned a top ranking in its annual MSBOA performance for their fortieth consecutive year; but how they earned it comes with a twist.

En route to this district competition, the two trailers carrying every single instrument crashed. Northview High School band director Greg Wells told FOX 17 no one was hurt, but there is at least $50,000 in damages.

When the marching band took the field to perform Tuesday night , the announcer said, “The Northview Wildcats Marching Band is proud to present this year’s show entitled, Victory Lane.”

Victory Lane could not be a better name.

“We got a one (ranking), thank goodness!” said Michaella Barton, Northview senior and drum major. “Fortieth year in a row, which is really cool to be a part of, even with everything that happened.”

The trailer that fishtailed and crashed is one of two that were recently painted and renovated,  Wells said, thanks to about $16,000 in donations from CARSTAR. The two trailers Tuesday were carrying all of the students' instruments and more owned by the school.

Wells said most of the instruments damaged were the pit instruments belonging to the front ensemble, which does not march but typically plays most of the difficult music.

“Damaged most of our keyboards; it looks like two marimbas, two vibraphones, chimes, concert bass drums, other things,” Wells said.

“It was pretty bad once we opened up the trailer with our equipment, but the fortunate thing was, again first, no one was injured, and second, all the personal instruments were also all totally fine.”

“We had parents there that didn’t even have students in the band that had former students that showed up just to help out,” said Wells.

Parents rushed the intact instruments from roadside to students. Meanwhile, other schools like Caledonia lent their instruments to Northview for their performance.

“Being able to have the other band support us and be like, Here you can use this of ours, you can use that of ours -- like seeing that helpfulness between the bands, not just in our own band -- was another huge thing that was amazing to experience,” said Barton.

Then, if you take a close look at the Wildcats’ performance, you will notice there are no hats, gloves, or gauntlets: key pieces of any marching band’s uniform that they did not have enough time to find and wear.

“We were so great to overcome that and still be the machine I know we are, and the family we are,” said Barton. "I think that’s really cool to see the accomplishment."

If you would like to help, send Northview Wildcats Marching Band director Greg Wells an email at: gwells@nvps.net .