Drunk driver gets prison for deadly crash, apologizes to family 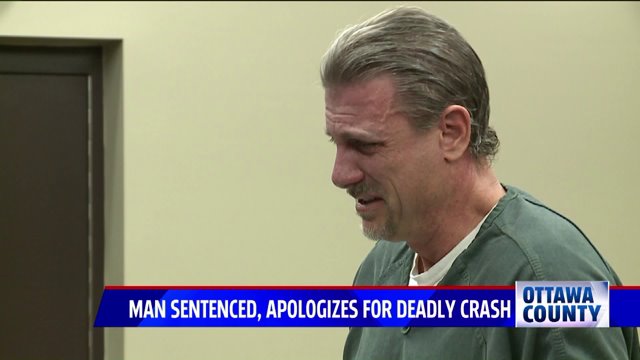 HUDSONVILLE, Mich. — The man who pleaded no contest to a drunk driving crash that killed a man over the Memorial Day weekend offered an emotional apology to the victim's family in court before being sentenced.

Richard Rish, 47, of Lakeview was sentenced Monday to between six and 15 years in prison for the crash that killed Bernard Langmeyer along I-196 near Hudsonville on May 23.

Langmeyer and his wife Debra were in their white Ford C-Max, parked on the side of the highway waiting for a tow truck to repair their flat tire. Rish, driving a Chevy Tahoe SUV, rear-ended the couple's vehicle.

Debra was wearing her seatbelt as the car was parked, but Bernard was not.

Prior to his sentencing Monday, Debra Langmeyer spoke before the court and asked the judge to hand down the maximum sentence to Rish.

The Langmeyer's vehicle was rear-ended by an SUV driven by Rish on May 23.

“Never again will my world be the same, or my children’s world be the same," she told the judge. “Your Honor, the defendant didn’t get up on May 23rd intending to kill my husband, however his choice to drink and drive on that day is what brought us here. “

Langmeyer described her husband, a retired UPS driver and father of four, as a good man, father and husband.

Rish could barely speak as he apologized to Debra and the dozen or so members of her family who were also in court.

"I just wanted to apologize to the family, I feel so horrible," Rish said crying. "I'm so sorry, I know it doesn't help and it never will."

Speaking to reporters following the sentencing, Langmeyer said she and her family hope Rish receives the rehabilitation he needs while in prison.

"I hope it serves as a message for all drunk drivers out there to stop it," she said. "I lost my husband and didn't intend to that day and all because of drinking and driving."

The crash slowed westbound I-196 at 32nd Avenue for several hours.

While this was his first drunk driving offense, records show Rish has a lengthy record of traffic and driving violations.