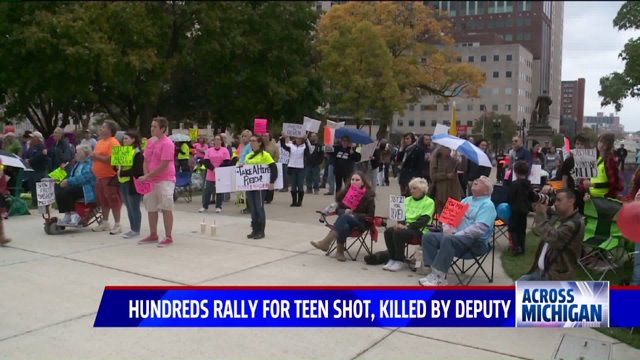 LANSING, Mich. — Hundreds gathered at the state capitol Saturday afternoon rallying for justice for Eaton County teen Deven Guilford, who was shot and killed by a deputy during a traffic stop in February.

"It's getting national. It's getting a bigger crowd of people together, more people are getting brave and stepping out and voicing their opinion," said Tim Smith, one of hundreds at Saturday's rally.

The rally comes a week after the family of Guilford filed a federal lawsuit against the Eaton County Sheriff's Department and the county for the death of their son.

Guilford's friends and family told FOX 17 that Saturday's rally wasn't just for Deven, but for everyone who's been shot and killed by police.

"To let an innocent 17-year-old get gunned down in the street, it's wrong," Smith said.

In February, Deven Guilford was shot seven times by Sgt. Jonathan Frost after the 17-year-old attacked the deputy during a traffic stop on the side of M-43, according to a report from the Eaton County Prosecuting Attorney's Office.

"He needs justice for what happened to him, it's uncalled for," said Ryan Rueckert, a friend of Guilford.

Jean Sherman never imagined losing her only grandchild this way.

"I saw him for the first time in 16 years in his casket. I hadn't seen him in 16 years, it broke my heart," Sherman said.

FOX 17 spoke with Deven's father off camera who said there were no words to describe how much the rally meant to him and his family.

Eaton County Sheriff's Sgt. Jonathan Frost was cleared by the county prosecutor in June of any wrong-doing after an investigation into the teen's death was completed.