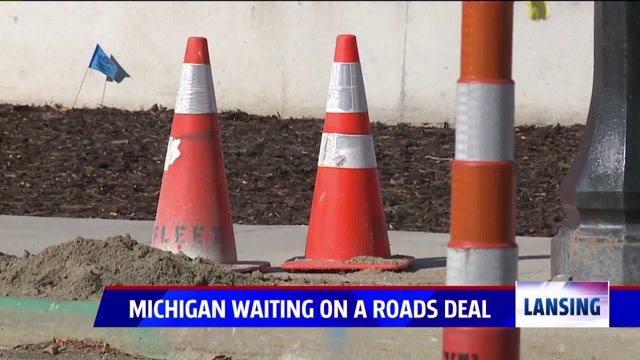 LANSING, Mich. — After a full day of backroom discussions, the Michigan Senate adjourned Tuesday without taking a vote on a package of bills that would increase vehicle registration fees and the state's gas tax to fund roads.

Late Tuesday afternoon, both sides said the vote wouldn't be happening on a deal aimed at raising $1.2 billion needed for road fixes.

The Senate is considering a plan unexpectedly approved last week in a late night session by House Republicans. It calls for shifting $600 million from the general fund into roads, while raising $600 million in new revenue by raising the state tax on a gallon of gas and hiking vehicle registration fees.

The current gas tax would rise from 19 to 22 cents per gallon and would be tied to inflation. The diesel gas tax would also increase.

The entire plan would be phased in over the next five years, eventually increasing funding to $1.2 billion a year for transportation by 2021.

Democrats in both the House and Senate have balked at the deal, arguing the plan's reliance on existing funds will strain future budgets.

“We have to have a plan that all of us can live with but not all of us love, I think that’s the best way," Jim Ananich, D-Senate Minority Leader, told FOX 17 following adjournment Tuesday.

“We want to make sure we send a plan back over to the House that’s responsible, that’s going to get done. This back and forth pig-ponging it’s not what the taxpayers sent us down here to do.”

An idea floated on the Senate floor Tuesday would create a "Road Innovation Fund" to tack on to the House plan, essentially setting aside money for "innovation" and a so-called "50 year road fix." The fund would collect the first $100 million annually from vehicle registration fees to set aside in a so-called "lock box." Those funds would only be made available through a vote and would have to be appropriated for specific use, according to a plan being passed around the Senate floor.

Income tax cuts originally proposed under the House plan would also be delayed until 2023 under the plan floated by the Senate.

Senate Majority Leader Arlan Meekhof told reporters some in his caucus had 'heartburn' over the proposed vehicle registration fee hikes, but added he's committed to working toward a solution, not just votes.

"There’s certainly a difference in the Senate-passed package and we’re working through those differences," she said. "One of the things I’ve heard from the hard-working people in my district is they really want the roads solution and roads fixed now.”

One thing several lawmakers in the Senate agreed on Tuesday, the need to 'clean up' what was referred to by many as a 'sloppy' House-approved plan.

"It was done pretty haphazardly, I don’t think it was well thought out and I think we have a lot more work to do in order to fix it," said Sen. Curtis Hertel, D-Meridian Township.

“This is moving pretty quickly, I think sometimes too quickly to get action. But we’re sitting in the room we’re trying to negotiate a reasonable deal for people in Michigan.”

“I met and talked with both the Senate Majority Leader and House Speaker late this afternoon. I believe there is strong momentum to provide the resources we need to halt decades of decline in our roads and bridges, making them safer for Michiganders now and for years to come.

There is room to work in the days ahead to ensure a comprehensive transportation solution that’s fiscally responsible and allows us to continue investing in our core priorities that help Michiganders and fuel our state’s comeback.“I look forward to continuing this critical work with our partners in the Legislature and getting a solution in place in the near future.”