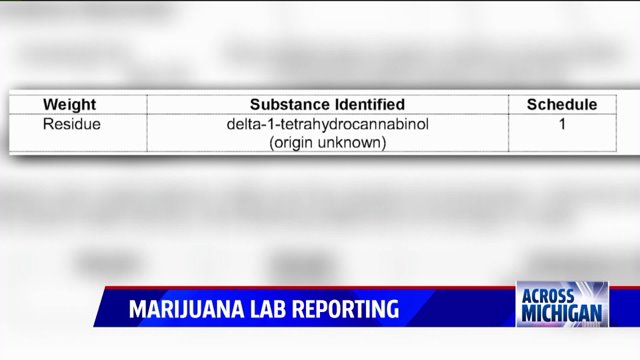 “If nobody stands up for this and it just keeps going the way it is, how many more people are going to get thrown under the bus just for using their prescribed medicine?” asked Lorincz. “It’s just ridiculous.”

Lorincz said BHO, which is made from marijuana resins, is a prescription he uses for debilitating pain. On an unrelated medical emergency call for his wife, law enforcement found a smear of BHO in his family’s home. Now, in part as a result of the charges, Lorincz has lost custody of his six-year-old son, restricted to supervised public visits for the past several months.

Komorn said MSP crime labs, along with the Mcihigan attorney general’s office and the Prosecuting Attorneys Association of Michigan, changed crime lab reporting policies for reporting marijuana back in 2013. Based on documents and emails received through the Freedom of Information Act, Komorn said state laboratories are falsely reporting marijuana as synthetic THC, essentially turning a misdemeanor charge into a felony.

"What is unique about this case is that they [the prosecution] are relying on the lab to report these substances so that they can escalate these crimes from misdemeanors to felonies,” said Komorn.

First charged with misdemeanor marijuana possession, Lorincz refused to plead guilty because he is a card-carrying medical marijuana patient. According to the Michigan Medical Marijuana Act, this charge can be dropped through Section 4 immunity, or Section 8 by asserting an affirmative defense.

However, the Ottawa County prosecutor charged Lorincz with felony synthetic THC possession, relying on the state lab report results from his BHO.

According to Lorincz’s crime lab report, technicians deemed his BHO to be "residue, delta-1-Tetrahydrocannabinol, schedule 1," then the phrase, “origin unknown.”

The state lab scientist testified in an earlier April preliminary exam that they could not determine whether Lorincz’s BHO was natural or synthetic. However, the prosecution charged him with felony synthetic THC possession.

"When you have a laboratory that is looking at a substance and reporting it in a way that makes it a Schedule 1 instead of the marijuana they know it is, it's creating a crime,” said Komorn.

“This is a lie,” Komorn said. "We have emails within the state laboratory communications indicating this, that they know it's unlikely, more than unlikely near an impossible, that the patients and caregivers are in a laboratory synthesizing THC. It's not happening, yet they report it as such."

Komorn filed motions in Ottawa County Circuit Court in this case earlier this week. His firm is stating that the crime labs and prosecution are reporting "bogus crimes," turning crime labs into a "crime factory." He stands firm that the prosecution has no credible evidence to charge or convict Lorincz, especially since the state lab scientist testified they cannot prove the substance to be natural or synthetic.

"The lab as far as I'm concerned has lost its integrity,” said Komorn.

“You can't play around with this type of thing and make stuff up and create crimes and be influenced by what the prosecutors want you to do and then come to court, take an oath, and expect to be received as an expert in forensic science. You've lost that."

FOX 17 reached out to Michigan State Police for comment. The MSP public affairs department for the office of the director released this statement to FOX 17:

“The ultimate decision on what to charge an individual with rests with the prosecutor. The role of the laboratory is to determine whether marihuana or THC are present. Michigan state police laboratory policy was changed to include the statement “origin unknown” when it is not possible to determine if THC originates from a plant (marihuana) or synthetic means. This change makes it clear that the source of the THC should not be assumed from the lab results.”

FOX 17 has also reached out to the Michigan attorney general's office and Prosecuting Attorneys Association of Michigan for comment.

The motions filed in court are calling for an evidentiary hearing Nov. 5.